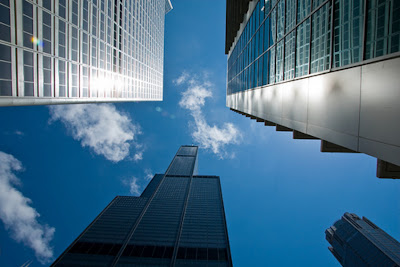 Chicago’s Willis Tower (formerly Sears Tower), North America’s tallest building, is already an icon in the city. But it could soon be an icon for solar energy use in cities? A new project will take advantage of the tower’s vertical surface area by adding up to 2 MW of solar glass panels - equivalent to a 10 acre solar field - on the south side of the building’s 56th floor. This pilot project will use photovoltaic glass units developed by Pythagoras Solar. The new windows, dubbed high power density photovoltaic glass units (PVGU), are a clever hybrid technology that lays typical monocrystalline silicon solar cell horizontally between two layers of glass to form an individual tile. An internal plastic reflective prism directs angled sunlight onto the solar cells but allows diffuse daylight and horizontal light through. Think of it as a louvered shade which allows for views but cuts out the harsh direct sun. 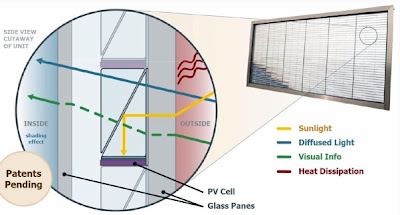 If the project is successful, it could lead the way to other similar projects in cities. It’s a great way for cities to harvest energy without using up precious space in the city or limited rooftop space. The product is also a potential breakthrough in energy efficiency in glass towers, where solar heat gain is the bane of energy-efficient design.

Pythagoras Solves Solar Energy Equation at Sears Tower: A solar window that potentially turns any skyscraper into a into massive power producer has just installed a pilot test in Chicago, at the landmark Sears Tower, according to Jetson Green. If the pilot goes well, the Sears Tower could end with a 2 MW solar power station, distributed vertically among its many windows.
Israel’s revolutionary Pythagoras makes window-integrated solar that really is a game changer. Their product is a solar window that is virtually as transparent as a normal window – yet it produces power on a square foot basis, that matches that of a normal solar panel. By contrast, most BIPV (building integrated solar panels) are the very inefficient thin film panels that take twice the space to make the same power. Pythagoras uses traditional PV integrated into a glass unit (PVGU) in such a way that the window still lets light in, but it just has a linear texture created by the power producing strips.
Their PVGU is priced to deliver a 5-year return on investment – a calculation that includes both its solar power generation, and also the energy efficiency savings – it reduces building heating and cooling costs because it blocks direct solar radiation making it the ideal day-lighting option.

Chicago’s Willis Tower to get solar windows: Chicago's Willis Tower, formerly known as Sears Tower, was the world's tallest building from 1974 to 1998 and remains the tallest building in the U.S. to this day. Its 1451-foot (442 m) height adds up to enough window area to keep a window washer busy for life, or space for enough solar panels to be comparable to a 10 acre solar power plant. As part of a pilot project, the south facing windows of the 56th floor of the Willis Tower will be replaced with Pythagoras Solar's transparent solar windows which cut down on heat gain – and therefore cooling costs – as well as harnessing energy from the sun.
While the image that comes to mind when one thinks of solar power plants is probably one of rows upon rows of panels covering large areas of desert, replacing the windows of skyscrapers with solar windows gives cities with limited free space the opportunity to create vertical solar power plants. Pythagorus Solar's solar windows, which the company calls photovoltaic glass units (PGUs), are rectangular box-shaped units that allow diffused light to pass through, but use a prism to reflect sunlight down onto a horizontal PV cell along the bottom of the unit to generate the same amount of energy as standard rooftop-mounted solar cells.
"We are excited to launch this pilot with Pythagoras Solar's leading-edge solar window solutions as a test for not only the energy savings that can be achieved, but the potential they represent to actually generate power through the sun," said John Huston, Executive Vice President of American Landmark Properties, one of the ownership partners of Willis Tower.
If the pilot project proves successful, Pythagoras Solar's PGU's could be expanded beyond the 56th floor to cover enough surface area to provide over two megawatts of solar power.
Posted by Karl Robinson at Thursday, March 24, 2011