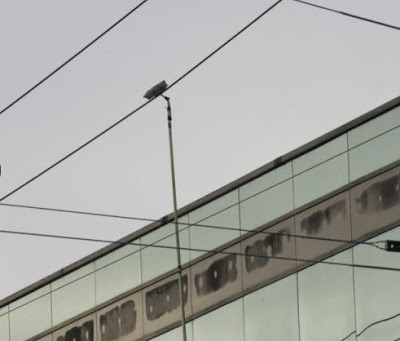 Worker Electrocuted to Death in Huntington Beach: Huntington Beach - A man washing windows at a medical office building in Huntington Beach was killed today when the equipment he was using came into contact with a 12,000-volt electrical line, authorities said. The accident happened at about 6:30 a.m. at Beach Boulevard and Newman Avenue, according to the Huntington Beach Police Department. The worker, whose age and name were not immediately released, was standing on the ground and washing windows of the three-story building when the accident occurred, Huntington Beach fire Capt. Jeff Lopez said. "He was using a long extension rod with a brush at the end of it ... and he had to step around a tree, it appears -- And as he did so, he brought the brush and the extension rod away from the building, and he came in contact with the power lines above him -- 12,000-volt power lines -- and tragically, it killed him." The building was partially evacuated briefly as a precaution while firefighters determined that the power line was secure and not posing a hazard, Lopez said.

A man washing windows at a three-story medical building was killed Tuesday morning when an extension rod he was using came in cotact with a 12,000-volt power line, authorities said. The incident was reported at about 6:34 a.m. at Beach Boulevard and Newman Street, said Jeff Lopez, deputy fire marshal with the Huntington Beach Fire Department. The body was lying on the sidewalk on Newman Street, adjacent to the Beach Medical building at 17742 Beach Blvd for about four hours after the incident occurred. The coroner's office removed the body at about 10:30 a.m. Jeff Lopez, deputy fire marshal with the Huntington Beach Fire Department, said the man was using an aluminum extension rod to reach the third story with his brush. "It came into contact with the power line which shorted to the ground and electrocuted him immediately," Lopez said. It appears the man was walking around a tree when his equipment touched the power line, Lopez added. Power was out while authorities removed the worker's brush that hung from the power line above the sidewalk on Newman Avenue. The medical office building was briefly evacuated and is now fully occupied, Lopez said. The worker's name and age were not immediately released.
Posted by Karl Robinson at Tuesday, March 29, 2011