Major diabetes study launched in Norwich: The £2.2m research study, funded by the National Institute for Health Research (NIHR), will screen 10,000 people in Norfolk who are at risk of developing type 2 diabetes and then prescribe dedicated lifestyle education on diet and exercise that could prevent hundreds of people developing the condition. Diabetes is one of the biggest public health challenges facing the country and, if successful, the Norfolk and Norwich University Hospital and University of East Anglia study could lead to mass screening and intervention programmes and substantial savings for the NHS.
In England it is estimated 2.4m people have the condition. About 80pc of those with diabetes in England have type 2 diabetes. In Norfolk there are about 30,000 people with diabetes and about 2,500 are newly diagnosed each year. Type 2 diabetes is most commonly diagnosed in adults over the age of 40, although increasingly it is appearing in young people and young adults. Glucose builds up in the blood, as in people with type 1 diabetes, but symptoms appear more gradually and the diabetes may not be diagnosed for some years.
Study participants will undergo a simple blood test to check the level of glucose in their blood. Higher than normal glucose (known as Impaired Fasting Glucose or IFG) could mean they are in a “pre-diabetes” phase and are more likely to develop type 2 diabetes. A group of those at risk of developing type 2 diabetes will then be given help to improve diet and exercise levels in order to see if preventative changes to their lifestyle can help reduce the risk of them developing the condition.
The research has been welcomed by Lakenham man John Batterbee, who now no longer needs treatment for type 2 diabetes after he lost eight stone. The 38-year-old, who used to take eight tablets and two insulin injections a day for his diabetes, said: “I was signed off from the hospital last month because my diabetes has completely gone. “My blood pressure is now perfect and my sugar levels are perfect.” Mr Batterbee, who has his own window cleaning business, had been due to have a gastric bypass, when one of his customers suggested he join her Slimming World Group in Poringland. In 28 weeks he lost 5st 3lb and went from 20st 5lb to 15st 2lb. Now, nearly eight months later, he has reached his target of shedding eight stone in total and has found that his sleep apnoea has also gone.
Mr Batterbee, who lives in Huxley Close, said: “I believe that many people don’t realise how big they have got - I didn’t until I saw a photograph of myself and couldn’t believe that was how I looked. “You just don’t believe it’s your weight that is the problem. “For me it was my high blood pressure that really got me thinking about making a change because my doctor scared me by telling me how it was a silent killer. “The help and support I have had from the Slimming World Group and the doctors at the hospital has been unbelievable - I couldn’t have done it without them. “Some scare tatics along with some support would really help.
If they could show you a chart and say you are going to get diabetes then perhaps people will make a change. “People need to be told the reality. I’m annoyed I let myself get to that stage. “I don’t think people realise how awkward being diabetic is - you have to watch what you eat and it really is a pain.” Mr Batterbee, who is married to Sharon and has an 11-year-old son and two adult stepsons, said: “I believe a little bit more education is the key to helping people.” If you or a friend has diabetes & you would like a cure - go here or here. 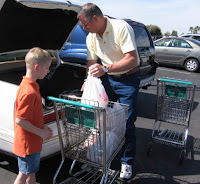 Families find ways to combat rising grocery prices: With a wife and two teenagers, Rafael Andrade says he is doing all he can to combat the rising prices of food and other grocery store commodities. Experts forecast a 3 percent to 5 percent increase in the months ahead due to a spike in the costs of grain and gasoline. So what is Andrade, who owns a window cleaning business, doing to make sure he, his family and his bank account don’t look like they’re beginning to starve?
The jump in prices has caused shoppers to scour grocery store ads, flock to the warehouse and thrift bakery stores and ranch markets and cut back altogether. “I’ve noticed that the prices have gone up,” said Andrade, as his family loaded up bags of groceries in front of the Fry’s at 825 W. University Drive in Mesa. “So, I look at the sales ads from all of the grocery stores. Fry’s, Bashas’, Safeway, Albertson’s. I used to be able to buy orange juice for 99 cents, now it’s $1.19. Fruits and vegetables are going up, too. We’re starting to go to Sprout’s or a Ranch Market because the produce is cheaper and it’s just as fresh. We go to Costco to buy soap and toilet paper. We’re using coupons, too.”
Andrade, who grocery shops with his family once a week, estimates they are saving $80 per week by scouring the ads to look for deals and using coupons. And, he still buys snacks — “if they’re on sale,” he said. According to the United Nations, global food prices hit a record high in February due to upward-spiraling gas prices and stockpiling by importers. These factors are hitting the already volatile cereal markets. Wheat, corn, sugar and edible oils have seen the sharpest price increases in the last six months, with a relatively smaller increase in rice. Produce has already skyrocketed, with prices expected to rise by roughly one-fourth to one-third in the next year. The rising costs of corn, wheat and other commodities, including gasoline, is causing increases in virtually everything we buy. Wheat is needed for loaves of bread while corn feeds cows, pigs and chickens for our meat. According to the U.S. Bureau of Labor Statistics, prices of fruits and vegetables already are up 3 percent, milk is up 10 percent and beef up 13 percent from a year ago.

Window washer looks forward to spring: Everyone looks up to Bing Mulder. That's because he spends a good deal his time at the top of a 24-foot ladder washing windows with a squeegee. The 54-year-old from St. Louis works for Sunshine Window Cleaning, and does windows for businesses throughout the metro-east. How did you get into the window washing business? "I was a welder till the recession in the '80s. There was no work. I looked around because I still had bills to pay. I started this in '84."
You wash windows all year long. Would you rather work at 0 degrees or 100? "I prefer the warm. At my age, these bones don't like the cold." It was a sunny 40 degrees on Friday morning, when Bing was working in a knit cap, flannel shirt jacket but no gloves. "We wash windows in ice and snow. Whatever it takes. At this time of year, oh yeah, I'm ready for spring." Did you wash windows Monday in the snow and rain? "Yes. Some customers have windows under awnings or overhangs."
Do you ever wash windows suspended from ropes on skyscrapers? "I used to. I was working at St. Louis Center. It was a calm day but the tall buildings catch the wind like a wind tunnel. Up there, a gentle breeze feels like 15-mph winds. All of a sudden, the wind lifted me up like a kite and slammed me into the wall. I never went back up. This ladder's high enough for me now."
Are you afraid of heights? "Heck, no. I go sky diving." Are you afraid of anything? "My wife (Barb)," he joked. Do most of the people walking on the sidewalk below you walk under the ladder or go around it? "Most people are OK walking under. You just have to make sure the person up above likes you," he said with a mischievous grin.

In praise of … window cleaners: The HMS Window Cleaner has been launched on the Calder to clean the panes of the Hepworth Gallery - Clarity and transparency are buzzwords nowadays, and honour for those who guarantee both in everyday life is overdue. Events last week at the Hepworth gallery, which opens in Wakefield in mid-May as a showcase for the Yorkshire sculptor and a new civic art gallery combined, provide an excuse. The riverside position of David Chipperfield's building means that land-based teams are not practicable: dangling from the multi-angled roofs would risk a dip.
HMS Window Cleaner has thus been launched on the Calder, bobbing below the weir as her crew squeegee above. Their voyage is understandably a spectator sport, as window cleaning increasingly is, especially in cities. Cradles high on tower blocks are as awesome in their way as climbers on rock faces, from Yosemite's El Capitan to Kilnsey Crag. The teams on the wavy glass that encases the Guardian's own Kings Place building work like synchronised swimmers with their sweeping, soap-and-rinsing arcs.
A modest new market for telescopic poles and other cunning gadgets has been created by houses whose basement areas, converted into separate flats, are no longer accessible for footing ladders. Arrangements on London's Shard are going to be well worth the wait. All this is welcome attention for a brave and skilled craft and also a satisfying complement to George Formby's twinky-twanky ukulele song. In his day it was what the window cleaner saw indoors that could be intriguing. Now the action outside promises just as much.
Posted by Karl Robinson at Tuesday, March 22, 2011