'Smart' electrochromic and gasochromic windows latest in green innovations: For the past few years, a seminar on new and innovative green building products has been a staple at Construct Canada. This year was no exception as BuildGreen Solutions partner Rodney Wilts updated architects, engineers and contractors on the some of the “great” green products that have crossed his desk in the past 12 months. “This (presentation) is a bit of a hodge-podge of things that we look at in the green building world,” said Wilts, whose firm works with architects, developers and other organizations to implement sustainable practices in the built environment.
BuildGreen has managed more than 40 LEED projects in Canada, the U.S. and Mexico. Wilts, whose firm is part of the Windmill Developments family of companies, said windows “are getting serious” as manufacturers compete to build the most energy-efficient products. Soon to hit the market, he said, are “smart” electrochromic and gasochromic windows. “We’re seeing leaps and bounds in quality window manufacturing,” Wilts said.

Other green products include a device that monitors energy consumption over a period of time and automatically kills “vampire” power and building-integrated photovoltaic systems. On the materials side, “torrified” wood appears to be catching on “like wildfire,” Wilts said. A chemical-free process is used to heat up the wood, making it less susceptible to mould, rot and fungi. Other green materials include an environemtally friendly drywall product. Wilts, whose firm is based in Ottawa, said clients also are demonstrating increased interest in indoor air quality. One such item that is on the market is a proprietary drywall product that cleans the air, reacts with volatile organic compounds and makes them inert and is highly mould-resistant. “It is no longer enough to be less bad,” Wilts said.

Living walls also are catching on in a big way, he said, noting that a five-storey, plant-covered Biowall has been incorporated into the Algonquin Centre for Construction Excellence in Ottawa. This system helps control humidity while also cleaning the air. Water efficiency is also gaining increased attention, Wilts said. He cited introduction of a greywater reuse system that is suitable for either commercial or residential projects, a dual-flush toilet that has an integrated sink for immediate greywater reuse and a 0.8 gallon per flush, high-efficiency toilet. In his presentation, Wilts also touched on various developments on the green building front, including LEED Canada and the Living Building Challenge, which he described as “LEED on steroids.” 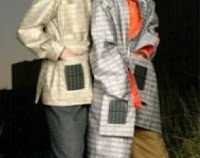 Clothing to harness renewable energy: Silvr Lining, a California based fashion company, has created the Go Collection of clothing with integrated solar power supplies suitable for charging personal communication devices (PCDs), such as cell phones and smart phones, and personal digital assistants (PDAs), such as MP3(4) players. This "wearable" power virtually eliminates the need to recharge at wall sockets. The power supply hardware is easily installed in GO garments in less than one minute, and un‐installed for cleaning just as quickly. The GO Integrated Solar Power System is comprised of 6‐inch by 8‐inch solar panels designed to fit pockets in the front of the garments. As these pockets contain windows to allow the sun's rays to impinge on the active side of each panel, the pockets are referred to as "frames". There are two frames in the GO Utility Vest, four in the GO Director's Jacket, two in the GO Myer's Topper, and two in the GO Cargo Pant that can accommodate panels.

The GO Solar Power System contains a power regulator and energy reservoir connected in between the solar panel and the device under charge (DUC). Its function is to efficiently capture the electrical power generated by the solar panel, to store that energy in the reservoir, and to provide the DUC with a highly stable voltage and current at its output compliant with the requirements of the mobile device. The system features "Power Tracking" to condition the energy making the most efficient use of the sun. The output voltage and current are automatically controlled by the regulator to the precise levels required by the DUC.

Simple indicator lights show the status of the system. GO power supplies can also be used separately as carry‐anywhere charging systems for hiking and picnicking, and can be left on the dashboard of the car or placed in the window of the office for complete internal recharging. Silvr Lining also offers the "Booster Panel", a stand‐alone panel about twice as large as the Small Panel. When connected, the Booster Panel would cut in half the charging time of either the reservoir of the Small Panel or a DUC connected to the Small Panel.

The solar panels are constructed of rugged, flexible, and non‐flammable materials able to withstand the sun's radiation, hot and cold temperatures, and wet and dry conditions. Cable assemblies, including cables, connectors, and receptacles, and electronics enclosure are also waterproof. Additional adaptors are also available. More.
Posted by Karl Robinson at Tuesday, December 21, 2010