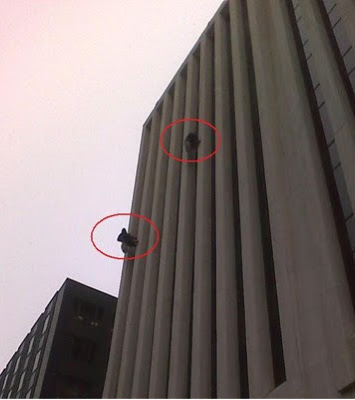 Washing Windows Hanging Off a Rope; I Hope They Are Paid More Than Those Washing The Other Side: Here's one example of why men might earn more on average than women: they tend to far outnumber women in jobs that are very dangerous, and therefore highly-paid: coal mining, working on oil rigs, fishing, farming, logging, excavation, construction and window-washing, etc. I took the picture above of two window-washers hanging off the AEI building today on ropes, with no obvious safety equipment other than the normal-size ropes attached to something on the top of the building (notice the ropes aren't even visible in the picture!), with no buckets, trays or harnesses to support them, and nothing below them except the sidewalk to stop a fall. I'm pretty sure these guys make a higher wage than the maintenance workers who clean the same exact windows from the inside of the building.
Of course, there's nothing that would prevent women from becoming outside window-washers, but there might be natural gender differences in preferences for work environments that would discourage most women from hanging off a rope 10 stories above the street. Perhaps men show greater tolerance than women for risky, physically demanding, dangerous work in extreme outdoor conditions, and women put a higher priority on office work environments that are low-risk, indoors, safe and pleasant. Higher (lower) risk = higher (lower) wages, ceteris paribus, and women on average may be perfectly willing to accept lower wages for lower risk jobs, which would contribute to the wage gap.
Here's BLS data showing that in 2009, 93% of all workplace fatalities were men, and here's data showing that 90% of all fatal motorcycle accidents in 2005 were men, so I don't think there's any question that men are significantly more risk-tolerant than women. Any empirical study of wage differences by gender should control for risk and the probability of work-related injury or fatality, which I don't think usually happens.

HIGH-RISE WINDOW WASHER SAYS WINNING LOTTERY IS JUST LIKE BUNGEE JUMPING SEATTLE: James Smith is a high-rise window washer, a bungee jumper and a self-proclaimed “adrenaline junky” from Issaquah. Still, he says that winning $200,000 from Washington’s Lottery is the biggest adrenaline rush he’s had in a while. So much so that when he saw the prize on his Scratch ticket on Friday afternoon, he couldn’t go back to work. He said, “I wanted to jump on my ropes, but I was so hyper and distracted that I decided I’d better not.”
James was working that day at Westlake Center in downtown Seattle. Around noon, he went to lunch with a coworker and decided to pick up a couple of Scratch tickets at a gas station. He scratched the first ticket, and it was a $20 winner. “[My coworker] said, ‘there’s no way that next one is a winner too.” He started to scratch the second ticket and accidentally revealed some of the prize section before the game section. “All I could see was the ‘undred,’” he said. He scratched on and found that the ticket was a winner, thinking he’d won $100, he finished revealing the prize to find that it said “two-hundred thousand dollars!”
“My coworker was going nuts!” James said. James said the adrenaline rush he got from the win was comparable to bungee jumping and was more exciting than rappelling down a 57 story building, which is the height of the tallest tower he’s worked on. James plans to use the money to take care of some family, buy a new car, take a trip and invest the rest. He called his sister on his way to the Lottery regional office in Federal Way to give her the good news. He said she didn’t believe him at first. James bought his $200,000 “Hot Streak” Scratch ticket at Sandhu’s Arco AM/PM in Seattle.

In specific, the legislation requires utility companies and public agencies such as IDAs to pay prevailing wages to services workers such as janitors, security guards, handymen, gardeners, and window cleaners. In his e-mail, Daly said the legislation was supported by "powerful downstate unions" and will harm economic development for several reasons: The legislation establishes a dangerous precedent by extending, for the first time, the application of prevailing wages to employees of private corporation not engaged in public works. If applicable to utilities, Daly writes, the same requirements could be imposed on any for-profit corporation in the conduct of private enterprise. Prevailing wage requirements were enacted to apply to work done on public projects, such as roads, bridges, and government buildings. This legislation would dramatically expand the application of these wage requirements to work done by private entities for private purposes.

Unpaid wages a growing problem for Chicago-area workers: Disputes over who is entitled to overtime often turn on complex and subtle legal distinctions, such as those in a federal lawsuit involving workers who wash the windows of Chicago high-rises. Some 25 former and current employees are suing Chicago-based Corporate Cleaning Services Inc., its owner and chief operating officer, in federal court for overtime pay. For seven years, Ramon Alvarado, 26, says he received $900 to $1,000 a week for washing windows in the Loop and along Michigan Avenue. Though he worked six or seven days a week, he says, he never received overtime pay. When he raised the issue, Mr. Alvarado says the response was, “You guys get plenty of money, so what are you complaining about?”
The employees say they were paid per job, or “piece,” which would entitle them to overtime pay. The company says they were paid by commission, which would render them ineligible for overtime. While the window washers don't sell anything, the law defines a “commission” as compensation that represents a proportion of the price paid by the customer for the goods or services provided by the worker. In court records, the workers argue their collective bargaining agreement—they are represented by Service Employees International Union Local 1—requires overtime. They also point to internal company documents that refer to “piece rate” compensation.
Corporate Cleaning Services argues the workers' pay relates to the price the company charges customers for window washing, making it a commission. In June, Judge Robert Dow Jr. wrote that “from a macro level, the evidence appears to demonstrate a relationship between the compensation and the price of labor to customers.”
However, Judge Dow denied the company's motion for summary judgment on the question of whether Corporate Cleaning services actually paid workers on that basis, noting that the workers' attorneys had alleged too many instances where that relationship broke down, where, “simply put, the deviations between the methodology that defendants aver they use to charge for plaintiffs' labor and the actual charges billed to customers are too great, too frequent and not sufficiently explained.” Both sides expect the case to go to trial in March.
Corporate Cleaning Services is owned by Neal Zucker, known for his civic engagement and philanthropy. He sits on numerous boards, including the Museum of Science and Industry, the Goodman Theatre, After School Matters and the Chicago Botanic Garden. He's also friends with President Barack Obama's senior adviser Valerie Jarrett and former White House social secretary Desiree Rogers. “The allegations are really baseless,” Mr. Zucker says. “I'm 100% union. A lot of my window washers make upwards of $60,000 a year.”

Four Kilgore High School robotics students have their eyes set on a state title after winning first place in a recent Region 7 competition. Seniors Zonera Javed, Jalissa Bagget and Chris McDaniel and freshman Peyton Sharp competed in the inventions category at the Dec. 4 competition held at the University of Texas at Tyler. The category allowed the team to use the parts provided in the Lego building kit, as well as any additional items the machine needs to complete a task of their choice. Building a robot out of blocks may sound simple enough, but narrowing down the possibilities of what the robot could do presented more of a challenge to the team. “Our other ideas included a sandwich maker and a wall painter,” Jalissa said. “We eventually decided to do a robot that cleaned windows on skyscrapers.” After more than 60 hours of development, the team came up with a spider-looking device they call “ALLAN,” which is short for “Automated Linear Lego Arachnid Nexus.”
The students explained their robot is designed to save human lives by reducing the need for people to climb the dizzying heights of the towers in most major metropolitan areas. ALLAN’s design allows him to crawl along the ground toward the building and attach himself to the wall using magnetic wheels. The robot is equipped with a high pressured pump to disperse a cleaning solution, a row of scrubbing brushes and a squeegee to wipe the glass clean. The team’s first place win in Region 7 secured them a spot in the State competition scheduled for March. The students plan to spend extra time refining their robot design during the next few months, hoping to fix programming issues and reduce the machine’s overall weight. 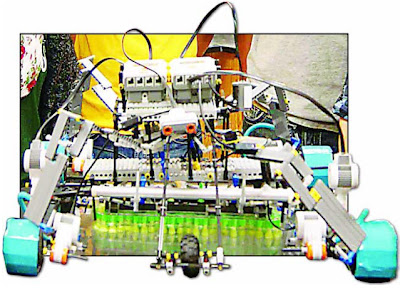