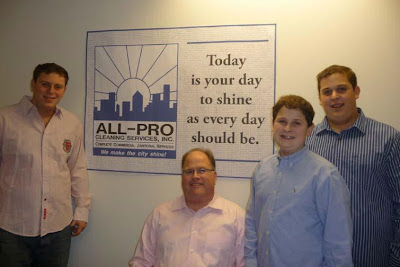 Fourth generation swept into cleaning business: Four generations of Steve Altman’s family have been cleaning up. Literally. Altman’s great grandfather Max Webber started a window-washing business in Youngstown in 1904, which branched out into a janitorial company servicing office buildings. But window washing remained the mainstay of Webber’s bustling Youngstown Cleaning Company. “In those days, window washers hung from tall buildings with ropes when they washed windows,” Altman says. “Back then it was very dangerous, but now that the lifts have changed, it is much safer. OSHA has made sure of that.” 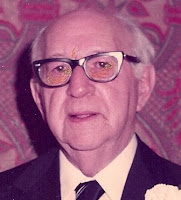 As the Youngstown community grew, so did Altman’s family’s business, which prospered with each generation that included his grandfather Milton Altman (pictured), his uncle Charles “Buddy” Altman and father Alan Altman. Upon graduation from Kent State University, where Altman even started a small cleaning company to pay his expenses, the Solon resident decided not to return to Canton to work with his father and uncle. “They wouldn’t pay me what I thought I was worth, and I never felt comfortable taking orders from people,” he says. Based on his working knowledge of the residential and commercial cleaning industry, Altman, 47, opened All-Pro Cleaning Services Inc. in Solon in 1984. He bought the family’s Youngstown Cleaning Company from his father and uncle 12 years later, and credits his successful running of both companies to his early hands-on apprenticeship.
“When I was 12 years old, I told my dad I wanted to help him, and he put me to work cleaning toilets,” he says. Starting from the bottom up “grounded me and gave me a strong sense of respect for the company’s workforce.” Over the years, Altman’s cleaning businesses morphed from residential, retail and office accounts (including offices of the CJN, Kent Hillel and Jewish Federation of Cleveland) into large institutional accounts. The 150-employee company has also expanded into the Akron/Canton area and Pittsburgh. As school districts and universities have tightened their belts in the recession, they have turned to professional cleaning companies like Altman’s because “our labor costs are much lower than their unionized maintenance workers,” he says.
“Doing business with Steve has been very positive because of his many years of experience and his easy accessibility,” says Jeffrey M. Kahn, president of NAI Daus commercial real estate firm. “When I have a maintenance issue, it is great to know he’s on the front line immediately straightening things out. The green movement has had a positive effect on the cleaning business. “In my great- grandfather’s day, he knew nothing about environmentally-friendly cleaning products,” Altman says. Other than clog cleaners, every item he now uses is suitable for LEED-certified (Leadership in Energy & Environmental Design) buildings. “When the Federation asked us to clean its new building, we went to our distributor and got green-certified products,” he says. His staff now uses vacuum cleaners with better filters and dust recovery and micro-fiber rags that are better for recycling.
Altman’s employees are working “greener” and smarter ever since 9/11, he says. “Every member of our staff is now trained in security, because they are often the only ones in a closed building at night,” he explains. But some aspects of Altman’s business have not changed since Max Webber washed his first window. “My great-grandfather built his business on the premise of an honest wage for an honest day’s work, and I follow the same ethical principles in all my dealings,” Altman says. “The family business was founded on a handshake, and it’s the same today.”
Will there be a fifth generation in the family business? “My wife Pam and I don’t want any of our three kids to come into the company unless they are ready to work hard,” Altman says. “I would rather they work for someone else and see what it is like on the other side of the broomstick.” Altman believes nepotism is often the biggest downfall of a family business. “It is unfair to give someone a job just because they are related to the owner – they have to earn their job, like my loyal employees have over the years,” he explains.
When Altman’s oldest son Blake, a business major at The Ohio State University, asked to work for his dad, Altman gave him the same job he began his career with: scrubbing toilets. “I was not going to give him preferential treatment,” he says. “After he helped one of my cleaning associates for a week cleaning 75 lavatories a night, he had a new respect for what I do for a living and for his co-workers. This business is not ‘show and tell,’ it’s real work. But it’s the kind of real work that prepares you for the future, whatever your career path may be.”
Posted by Karl Robinson at Saturday, December 18, 2010