Window washer rents house that's not his: Las Vegas, Nevada - A young couple getting a great deal on a rental home felt a little uneasy about the man renting to them. They say they saw it on Craigslist, but when the deal sounded too good to be true they started an online search. What they learned surprised them and the real homeowner. One of the victims says she was blind sided by a man she trusted and was just trying to help out.

When Darlene Rogers wanted the windows of her home washed she went to the Sun City Yellow Pages. Liking his work, she hired the window washer for a property she was trying to rent. "So it was kind of impressive that here was a man out there trying to get a job. I mean working, showing up," says Rogers. But that good impression was short lived. "When did you find out he was more than a window washer," asks Action News reporter Marco Villarreal. "Actually, when I got a call from one of my agents that was advertising the house," says Rogers. 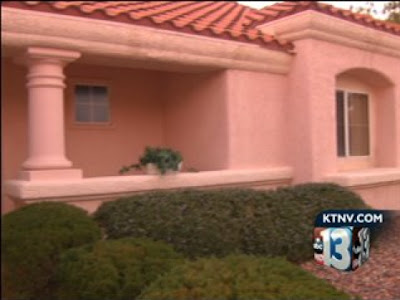 Negotiating with a young couple, Roger Epstein seemed to like the idea of renting out a house that wasn't his. "He had gone out at some point during his window washing and duplicated the keys at one of our local stores here," says Rogers. Eight hundred bucks for the house sounded like a great deal, but when potential renters heard there was no lease to sign, a red flag went up. "They thought it was strange, and the young girl had called her mother and said, 'This is too good to be true.' So these kids were real smart. They googled it. They googled the property and saw that it had been listed," says Rogers.

Epstein was picked up as he tried to deliver house keys for a $500 deposit. What police showed Roger's later left her disturbed. "The officer came in with a block of keys that were on a ring, and they were about 4 to 6 inches thick," she recalls. "It's very easily duplicated and with the vacant houses in this area, it's very simple to set this operation up," says Sgt. Andrew Pennucci. Grateful a scam artist is behind bars, she can't help but wish Epstein had chosen the higher road. "He did a good job on the windows. That's kind of very disappointing because it's hard to find reasonable window cleaner," she says.

Darlene Rogers has alerted police to the possibility the window washer has scammed other communities. Epstein mentioned to Roger's that he's worked in affluent areas like Scottsdale, Arizona, Newport Beach, Huntington Beach, and Laguna Hills. Police are looking into that and seeking anyone else that may have been scammed here in Las Vegas. Roger Allen Epstein is facing several counts of burglary, obtaining money under false pretenses, and possession of burglary tools.
Posted by Karl Robinson at Saturday, December 11, 2010