Windows Of The Future 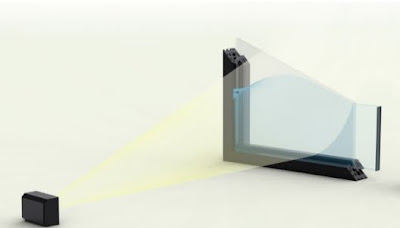 Motion sensitive glass could boost home security: Besides letting in light and providing pleasant views, (hopefully), windows unfortunately also provide a convenient entrance for burglars. Security systems have long employed contacts that, when broken, activate an alarm, but what if the simple act of moving around outside a window were enough to raise the alert. That’s the concept behind a system developed by the Fraunhofer Institutes for Applied Polymer Research IAP in Potsdam-Golm and Computer Architecture and Software Technology FIRST in Berlin that sensitizes windows and doors to detect suspicious movements.
The motion sensor enables window panes and glass doors to detect movements thanks to a special coating. If anything changes in front of the pane, or someone sneaks up to it, an alarm signal is triggered. “The glass is coated with a fluorescent material,” explains IAP group manager Dr. Burkhard Elling. “The coating contains nanoparticles that convert light into fluorescent radiation,” so when the invisible light of a UV lamp “illuminates” the window panes it generates fluorescent radiation in the coating which is channeled to the edges of the window, where it is detected by sensors. Therefore if someone blocks the light of the lamp, less light reaches the coating and less fluorescent radiation is produced, which the sensors detect.
Simple applications would require only one sensor, but if several sensors are installed on all four sides of the window frame, conclusions can be drawn from the data as to how fast and in what direction an object is moving. Its size, too, can be estimated by the sensors so that moving objects the size of birds for instance do not trigger an alarm. Likewise, the sensors do not react to light from passing cars, as the system can interpret different light signals. The system can also be implemented on existing windows with the coating able to be sprayed on by airbrush or glued on as a film.
A demonstrator system already exists, and the researchers now plan to optimize the dyes and their concentration in the coating. Looks like my days as a peeping tom may be numbered. Oh well, it was good while it lasted. 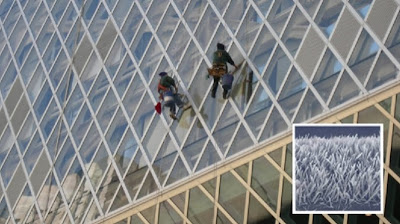 While attempting to find a cure for Alzheimer’s disease researchers have discovered a new nanomaterial that can repel dust and water and could provide a self-cleaning coating for windows or solar panels. Unlike similar dust-busting materials that take inspiration from the surface of the lotus leaf, the new material is actually made up of molecules of peptides that “grow” to resemble small forests of grass. The coating also acts as a super-capacitor, thereby having implications for electric cars in that it could provide an energy boost to batteries.
Using a variety of peptides - short polymers formed from the linking of amino acids – the researchers from Tel Aviv University (TAU) found a novel way to control the atoms and molecules of peptides so that they "grow" to resemble small forests of grass. The short peptides, which are simple and inexpensive to produce, were used to create self-assembling nano-tubules in a vacuum under high temperatures.
In the range of one-billionth of a meter in size, these nano-tubules can withstand extreme heat and are resistant to water, making them an ideal candidate for the creation of a coating that could be used to cover the sealed outer windows of skyscrapers so that they never need be washed by daredevil window-washers again.
Such a coating could also improve the operation of solar panels, which can become up to 30% less efficient due to dust accumulating on their surface. This would also save money on maintenance and cleaning, which is especially a problem in dusty deserts, where many solar farms are installed.
As a capacitor with unusually high energy density, the researchers say the nano-tech material could also give electric batteries a boost. One of the limitations of the electric car is thrust, and the team thinks the research could lead to a solution to this difficult problem and provide the extra oomph required in starting an electric car, going up a hill, or passing other vehicles on the highway.
"Our technology may lead to a storage material with a high density," says TAU graduate student Lihi Adler-Abramovich. "This is important when you need to generate a lot of energy in a short period of time. It could also be incorporated into today's lithium batteries."
The TAU researchers have already been approached to develop the coating technology commercially, which could see self-cleaning windows and more efficient energy storage devices appearing in a few years, but they also plan to continue their work on short peptides for a treatment of Alzheimer’s disease – the original focus of the research. 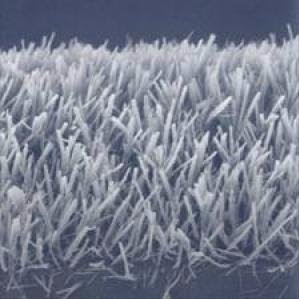 A Window That Washes Itself? New Nano-Material May Revolutionize Solar Panels and Batteries, Too: A coating on windows or solar panels that repels grime and dirt? Expanded battery storage capacities for the next electric car? New Tel Aviv University research, just published in Nature Nanotechnology, details a breakthrough in assembling peptides at the nano-scale level that could make these futuristic visions come true in just a few years.
Operating in the range of 100 nanometers (roughly one-billionth of a meter) and even smaller, graduate student Lihi Adler-Abramovich and a team working under Prof. Ehud Gazit in TAU's Department of Molecular Microbiology and Biotechnology have found a novel way to control the atoms and molecules of peptides so that they "grow" to resemble small forests of grass. These "peptide forests" repel dust and water -- a perfect self-cleaning coating for windows or solar panels which, when dirty, become far less efficient. "This is beautiful and protean research," says Adler-Abramovich, a Ph.D. candidate. "It began as an attempt to find a new cure for Alzheimer's disease. To our surprise, it also had implications for electric cars, solar energy and construction." As cheap as the sweetener in your soda
A world leader in nanotechnology research, Prof. Gazit has been developing arrays of self-assembling peptides made from proteins for the past six years. His lab, in collaboration with a group led by Prof. Gil Rosenman of TAU's Faculty of Engineering, has been working on new applications for this basic science for the last two years.
Using a variety of peptides, which are as simple and inexpensive to produce as the artificial sweetener aspartame, the researchers create their "self-assembled nano-tubules" in a vacuum under high temperatures. These nano-tubules can withstand extreme heat and are resistant to water.
"We are not manufacturing the actual material but developing a basic-science technology that could lead to self-cleaning windows and more efficient energy storage devices in just a few years," says Adler-Abramovich. "As scientists, we focus on pure research. Thanks to Prof. Gazit's work on beta amyloid proteins, we were able to develop a technique that enables short peptides to 'self-assemble,' forming an entirely new kind of coating which is also a super-capacitor."
As a capacitor with unusually high energy density, the nano-tech material could give existing electric batteries a boost -- necessary to start an electric car, go up a hill, or pass other cars and trucks on the highway. One of the limitations of the electric car is thrust, and the team thinks their research could lead to a solution to this difficult problem.
"Our technology may lead to a storage material with a high density," says Adler-Abramovich. "This is important when you need to generate a lot of energy in a short period of time. It could also be incorporated into today's lithium batteries," she adds.

Window Cleaner a thing of the past?

Coated with the new material, the sealed outer windows of skyscrapers may never need to be washed again -- the TAU lab's material can repel rainwater, as well as the dust and dirt it carries. The efficiency of solar energy panels could be improved as well, as a rain shower would pull away any dust that might have accumulated on the panels. It means saving money on maintenance and cleaning, which is especially a problem in dusty deserts, where most solar farms are installed today.
The lab has already been approached to develop its coating technology commercially. And Prof. Gazit has a contract with drug mega-developer Merck to continue his work on short peptides for the treatment of Alzheimer's disease -- as he had originally foreseen.