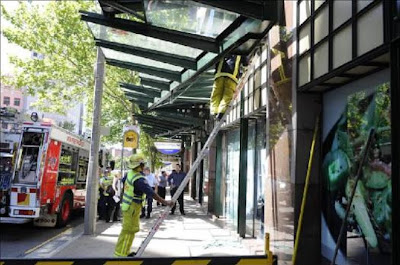 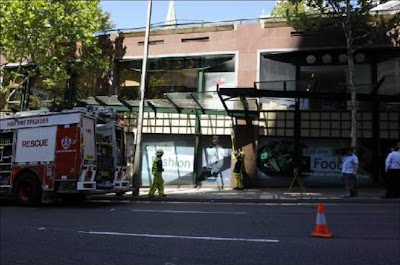 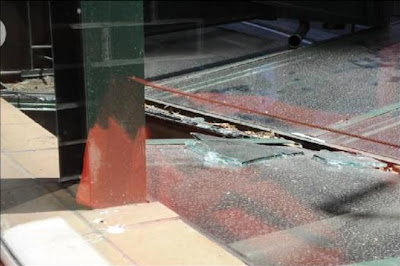 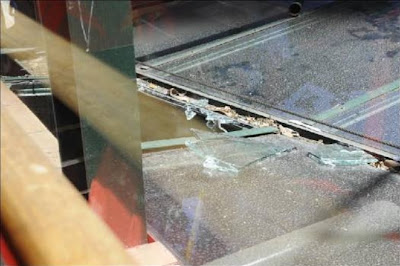 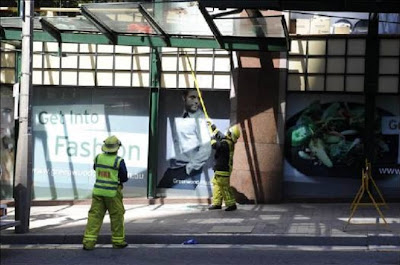 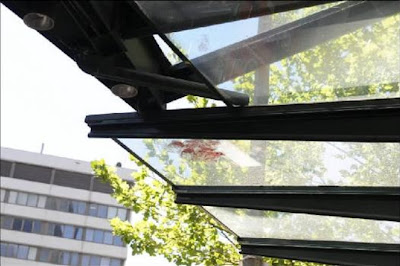 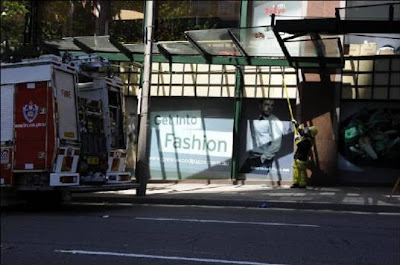 Window cleaner falls through glass canopy at Greenwood Plaza, Sydney-Australia: A window cleaner was lucky to escape with only minor injuries when he fell through a glass canopy while cleaning windows at Greenwood Plaza in North Sydney earlier today. Police, ambulance and fire services were called and traffic travelling on the Pacific Highway was delayed as firefighters attempted to free the man. Passers-by said the man had been working to clean the windows above the ground floor canopy when his foot had broken the glass.
“The man had been cleaning windows when his leg went through the glass panel.” said North Sydney Police acting sergeant Scott Macgee who was at the scene. ``He received a cut to his leg and was taken to hospital.” Workers in the Little Sushi Bar Tokyo sushi shop adjacent to the window said the man had put his weight on the panel to clean it when it broke under him.
“He jumped down slightly to clean the window and the window broke under him,” said assistant Alice Kim. “The man got stuck in the middle of the glass and was trying to get out of window and he cut himself.’’ He has been taken to Royal North Shore Hospital with minor injuries. Click thumbnails to enlarge. 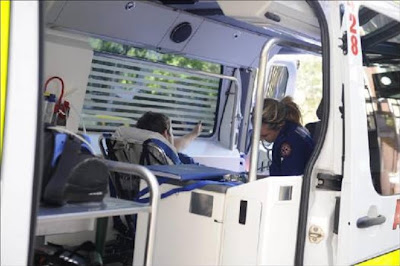 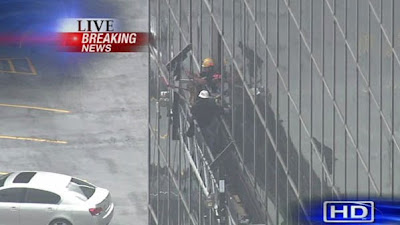 Crews rescue trapped window washers: HOUSTON - Two window washers had a harrowing experience in Greenway Plaza. They were about 10 floors up when they encountered a problem with their scaffolding. We first brought you the rescue live on Eyewitness News just after 1pm.
The high winds became fierce when they began to whirl and swirl around the Greenway Plaza high rises. At that point the men were trapped. Their scaffolding lines twisted, creating danger for the window washers and those below. "It was rocking for a while," said eyewitness Scott 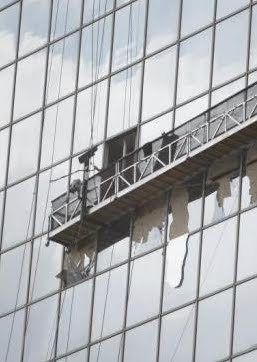 Jennings. "I can imagine what happened is before they got it secured it went sideways and then just started taking out glass." Fire officials say the two men were harnessed into the scaffolding and not in danger of falling, but they were stuck as the platform twisted in the wind.
HFD Chief Robert Schlieter explained, "Because it was being buffeted around, it broke several of the windows on the building. But they were unable to escape into the building because it went into a mechanical room wall and they couldn't get through it." Firefighters broke out windows one floor up on the 11th floor and pulled the men inside. All of it happening in front of surprised and terrified office workers. "I've have been in this complex for 14 years and I have never seen anything like this before," said eyewitness Scott Van Dyke. "They're cleaning our windows about twice a year and you'll see guys go up and down all the time, but you never see them break loose and guys holding on for their lives." The two trapped men were not injured. They were treated on the scene and released. 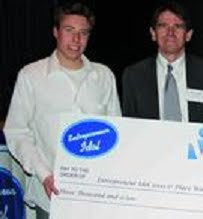 Student entrepreneur Jordan Leahy, a sophomore, won $3,000 recently in Northwestern University's "Entrepreneur Idol" competition. Leahy, a member of the Collegiate Entrepreneurs' Organization, took home the prize for his business, Clest LLC. "It's always nice to get extra exposure because a lot of times you build a company out of [personal relations]," Leahy said. "It's really nice to be able to continue to dial in how you present and how your tone and your story about your company. It gives you a lot more confidence when you go into larger companies." "Entrepreneur Idol" required participants to sell their business idea to a panel of judges in a short amount of time. The competition is described as an "elevator pitch" because it would be the same amount of time to have a conversation with someone in an elevator. In this case the time limit was three minutes. Despite being only 22, Clest is not the first business that Leahy has started. At age 15 he started his own window cleaning business, which he sold in 2008. "Entrepreneur Idol" was just the first in a string of contest victories, he recently won $300 at the national CEO elevator pitch competition. He was also the 2008 UW-Whitewater Warhawk Business Plan Competition winner for the Rendlex Tool. The tool was invented to house various tools in the handles of window cleaning supplies. Leahy's motto is "It's not who you know, it's not what you know, it's who knows you." At the rate he is going, a lot of people are going to know the name Jordan Leahy.

Industry on hold for cell phone bill: The bill was referred to the Assembly Committee on Transportation, joining similar cell phone bills on hold before getting a public hearing. State Rep. Jeff Smith, D-Eau Claire, introduced one of those bills. His would prevent people younger than 18 from using any cell phones while driving and would require hands-free devices for people older than 18. “It’s not a matter of if; it’s a matter of when,” said Smith, who said he was using a hands-free device on Wednesday while plowing snow. “Almost every car you buy new now has some kind of hands-free option. This is the direction we’re going.” But Smith said policing cell phone use will be difficult. He said he has a window-cleaning business in Eau Claire and tells employees not to talk on cell phones while driving his seven company-owned trucks. “I can’t say for sure whether they do or don’t,” he said.

Courtesy is really quite simple. Anyone in marketing knows customers do not just buy a product, they buy a feeling. And it’s everyone’s job, from the manager, to the window-washer to the cashier, to make that a positive feeling. Therefore, I am starting a new column, to expose the good, and more often, the bad restaurants and shops in the Minneapolis area in terms of customer service. And if any higher management sees their shop and wants to give me free vouchers in consolation or appreciation of my reviews, so be it…

Mike Chapman, a high-rise window washer in college and a former Mill Creek policeman who was working part time for the Customs Service, chased Ressam through downtown Port Angeles, eventually tackling him and throwing him to the ground. His actions earned him the nickname "The Tackler" from the late Washington Sen. Slade Gorton. "Ressam did not have a gun, that's what I was thankful for," Chapman's wife, Bobbi, said. Five months later, Chapman would announce his intention to run for commissioner, a job he has held ever since. He'd already been thinking about running for public office, he said -- and the Ressam incident had nothing to do with his decision. But when Chapman was courted by the county Republican Party -- he's now an independent -- there were two schools of thought on the direction of his campaign: play on his status as a well-known candidate or stay away from the Ressam issue altogether.
"I chose to take the route of the unknown and worked my butt off," Chapman said, adding he knocked on 3,000 to 4,000 doors introducing himself to Port Angeles voters. The Chapmans' two boys are now 10 and 12, more cognizant of election cycles than the anniversary of their father flinging to the ground a terrorist hellbent on destruction, Chapman said. "It seems like a long time ago to carry a gun and wear a uniform."
Posted by Karl Robinson at Tuesday, December 15, 2009