Coast to Coast for Window Cleaner 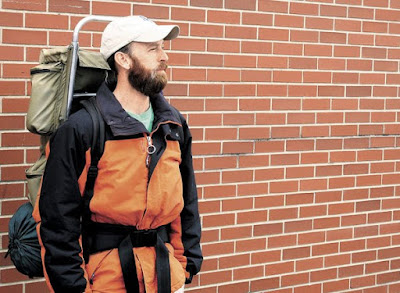 A Colorado man is using a love of the outdoors to promote the love of Jesus Christ. Daniel Johnson of Colorado Springs is hiking through the country as part of the "Coast to Coast for Christ" program. "I am hiking from the top of Maine to the bottom of California, spreading the word of the gospel," Johnson said. The 38-year-old window washer began his hike in June, heading up and down much of the Appalachian Trail. He now is following the American Discovery Trail, which follows U.S. 50 from the East Coast to the West Coast. He hopes to end his journey in August in California.

Johnson said the life path leading to the hiking trail took a little longer to navigate, with about four years of thinking and praying before the idea became a reality. The idea first came to him when he saw television reports about a man hiking cross country, but not for any specific purpose. "I thought, this guy is getting all of this publicity for no real reason," Johnson said. "Why isn't someone doing this for the cause of Christ?" Now 162 days into his mission, Johnson said he is thrilled to be spreading the word. He relies heavily on churches and the kindness of strangers in his journey, he said, often speaking to groups about his mission and making new friends.

When not staying at a church or with locals, Johnson camps outside in a tent he carries with him, something he has only had to do once during the chilly winter months. "That was a pretty cold night," he said. Johnson has been staying with Phillip Smith of Davisville since his arrival in the area. Smith lives about 100 yards from a section of the North Bend Rail Trail, which is part of the American Discovery Trail. Both Smith and his wife are avid hikers, and he said he admires Johnson's spirit and drive. "He is hiking my hike," Smith said. "I wish I could be doing this."

In about two weeks Johnson hopes to be in the Cincinnati area, touring the Creation Museum in nearby Petersburg, Ky. "I would like to have people able to come out and meet me while I'm at the museum," he said. Johnson said those interested can track announcements and updates through his Web site, as well as through Twitter, YouTube and other social media.

A Texas native is walking across the country for Christ, and Monday he made his way into Belpre to make sure his message was heard. The 38-year-old first began his journey across the country on June 4th in Maine, and his goal will be to make it to the border of Mexico. Johnson is traveling solo and counting on help from others with his accommodations while dealing with the winter elements. He has a 42 pound backpack he travels with, but he said nothing is going to slow him down. "I've seen other people walk across the country or bike across the country for their cause. I thought all the publicity people get with that someone should be doing that for the cause of Christ," said Johnson. Johnson is planning on getting to California by August.