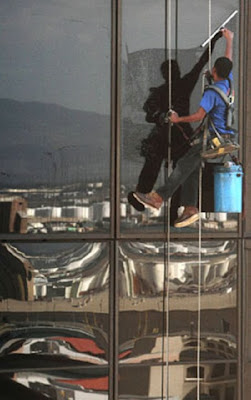 Above: SQUEAKY CLEAN: A window washer cleaned the windows of a building along Bishop Street in downtown Honolulu yesterday. 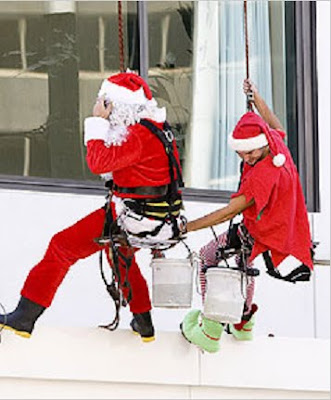 Window dressing for Christmas/New Zealand: If you're feeling the pinch as we head into Christmas, spare a thought for Santa. A week before the big day, he and his elves set about earning a bit of extra cash for gifts by taking on a window cleaning job at the Holiday Inn in Featherston St, Wellington. Hotel general manager Heather Idoine-Riley said the hotel's windows were always cleaned about this time of year, when the equinox gales were over, so summer guests could enjoy the views. This year, the crew from Bright Sparks suggested they do it in costume. The hotel was full, and guests were warned there were window cleaners outside, but they were all surprised to see Santa and his elves abseiling down the building. "People in conference rooms were coming out and saying, 'Hey, did you know Santa's outside?'," she said. "Everyone was just tickled pink. It's the spirit of Christmas."

PORTLAND, Oregon: No matter where you go in Oregon or Southwest Washington, people are talking about the weather. And they're making the best of the blustery conditions. Some jobs require their workers to be out in the cold, from gas station attendants to tree farm workers. So on days like this, "the hands and toes get real cold," said David Hein, a worker at a Christmas tree lot. Mike Long also is familiar with working in the elements. He's a window cleaner. "We also do high-rise window cleaning and you definitely can't do that in the high winds," Long said. KATU's cameras caught up with Long as he gassed up his business rig - after it had some trouble getting to Portland through the Columbia Gorge winds. "I was goin' down Interstate 84, and I thought I had the ladders tied down," Long said, "but my 40-foot ladder come off the top of the van." He was able to tie it back, with no accidents or property damage. It's all part of living in the Northwest, and working with the wind.

Don't forget to subscribe to Don's site to receive news of when the videos come out! Don says "Merry Christmas and Happy New Year, everyone! I’m really busy right now, and I haven’t had to discount my prices at all, in spite of continuing bad economic news…" 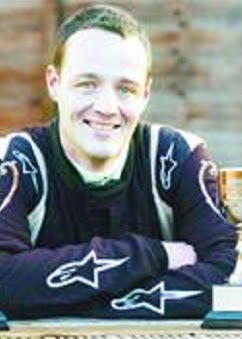 Cat helps window cleaner Jay clean up: Window cleaner Jay Gardner had a clear vision of his aims when he made his debut in this year’s Caterham Academy Championship. After making it to the finals of a single-seater scholarship, the 28-year-old former motocross rider knew he had the ability. And after building his own Caterham sports car, Gardner, who lives in Barrowford, is celebrating after mopping up in the seven-round series. “The scheme involves you buying a Caterham off the factory in kit form, which you then build yourself, and included in the price is the race licence, a track day to set-up the car and entry into the championship. “That comprises seven rounds, with three sprint meetings at Curborough, Pembrey and Lydden Hill and then four races at Anglesey, Rockingham, Brands Hatch and Mallory Park.” And Gardner proved to be the class of the 30-stong field, winning four rounds on his way to the title and taking the lap record at Rockingham and Mallory. “The points table is designed to ensure a close-run championship, and it certainly works. I won it by just one point in the final at Mallory Park,” he explained. After collecting his trophy at a gala dinner in London, Gardner is now looking ahead to 2010. “The Academy is for first-timers only, so I’m looking to move up to the next level, which is the Caterham Roadsports Championship. 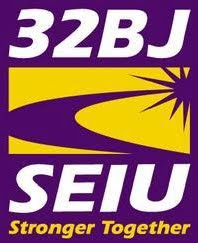 Potential Strike Update: Broadway House Staff Union and League Meet Today - Negotiations for the new union contract (the current one expires on December 31) that covers over 240 theatre service workers began on December 3, 2009 and resumes today between 32BJ SEIU and The Broadway League. Variety reported on Tuesday that the members of SEIU 32BJ have now voted to authorize a strike should the union's bargaining committee decide that one is necessary. While this doesn't mean that they will strike, it does bring the threat of a strike closer to reality.
Discussions with other unions including Equity who might also then honor a strike are also said to be underway. Earlier today, Stephanie Gaskell of the New York Daily News reported that Broadway may be acing yet another stagehand strike, as a group of about 150 cleaning workers who tend to many of Broadway's houses - members of 32BJ SEIU - are threatening a strike if dissatisfied with their current contract negotiations. The demands of the workers include a $1.50-an-hour pay raise and and no health insurance cuts. Says 32BJ's secretary-treasurer: "In this environment, every employer is complaining. Broadway is doing far better than anybody."
With more than 110,000 members in eight states and Washington, DC, 32BJ is the largest property service workers union in the country. 32BJ is affiliated with the Service Employees International Union (SEIU), an organization of over 2 million members united by a belief in the dignity and worth of workers and the services they provide. To raise industry standards and improve lives, SEIU and 32BJ focuses its resources on organizing new members into the union. The union consists of security officers; doormen, porters, and maintenance workers; bus drivers and aides; window cleaners and food service workers.

Essex Police urge residents to contact them about conman: A bogus window cleaner has been targeting elderly people in a village. Police say the con-man struck twice in Theydon Bois, on Sunday, December 13 at the homes of women in their 80s. At one address he claimed that he had cleaned the windows and charged £5. But the windows had not been touched. At a second address he charged £3 but is thought to have taken about £15 by tricking the woman out of change from a £20 note. Again the windows were not cleaned. Police have urged residents to be vigilant and to call them if they are approached by a stranger claiming to be their window cleaner. The man involved was white, aged about 40 to 50, about 5ft 10ins tall, and had short dark hair. He was wearing a grey jacket. Anyone with information should contact Epping police station on 0300 333 4444.
Posted by Karl Robinson at Thursday, December 17, 2009