Company blamed in window washer death: The death of a window washer who fell 20 floors from a building in downtown Montreal in August was preventable, said Quebec’s workplace health and safety board Wednesday. In its report into the death of André Laroche, the CSST is critical of the window-washing company, Mon Laveur de Vitres, which it said "compromised the security of its workers." Laroche, who had 33 years experience as a window washer, was not wearing a safety harness when he fell to his death from the roof of the building at the corner of President-Kennedy and Aylmer.
Laroche was supervising three other employees who were adjusting their "swing stage" — a platform that is manoeuvred up and down the side of a building — in order to be able to use it in the tight space between two buildings. When the weight of a cable dangling off the side of the building caused part of the stage to tip, Laroche tried to grab the platform — but wound up falling over the edge of the building.
Harnesses not used: While there were four workers onsite, there were only two safety harnesses, and none of the workers was attached, said CSST inspector Sèdoté Ghislain Hounkpe.
Hounkpe also said the workers should not have been adjusting the equipment so close to the edge of the building. "The procedure was unsafe … working the way they were working," Hounkpe said. "The equipment will fall, that's for sure. The harness will protect him because he will be suspended." The workers were not adequately supervised, said Hounkpe, who was also critical of the company’s attitude toward safety. 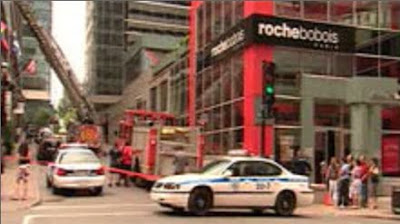 "The policy they have is: only when they operate on the platform, washing the windows, [it] is only then they use the harness," Hounkpe said. The company faces a fine of between $5,000 and $20,000 to be determined by the Quebec Court. The CSST said falls from high places are a serious problem in Quebec. In 2008, officials said more than 4,000 workers fell from a height of more than three metres. Eight of them died.

After man fell to death cleaning window, kin say probe half-hearted: New Delhi A day after Jitendra Narotia, 25, fell to his death while cleaning the seventh-floor windows of Hyatt Regency hotel in South Delhi, his relatives on Tuesday alleged the police are trying to “hush up” the matter.
While RK Puram police registered a case of negligence against unknown persons (under IPC Section 304A) on Monday night, Narotia’s cousin Rajesh today claimed the police are not looking for the “real” people responsible for this “negligence”. Investigating officers today said they have not yet recorded statements of others working alongside Narotia at the time to know what exactly had happened — the incident took place at 4 pm on Monday. Narotia was employed with the company Techno Clean, which has the contract with the hotel to clean its windowpanes, for the last more than four years, his brother Rajinder said. Grieving, Rajinder did not want to talk further about his brother’s death.
Rajesh, meanwhile, claimed the police are not keeping them informed about developments in the case. “We have learnt that a company supervisor named Sudhakar (from Techno Clean) was reportedly detained by RK Puram police for questioning,” he said. “But whenever we ask about developments in the case, the policemen brush us off, saying they are looking into the matter.” He said as no one from the company met them since the fatal incident on Monday, the family members went to the company today and asked officials there to look into the matter.
About compensation to the victim’s family, Rajesh said, “A company official had come to meet us but she did not commit anything about compensation.” He said the police and company officials are saying that Jitendra had unlocked his safety belt and was trying to go down by the rope. “But we would like to ask them why would he do that? There must have been some negligence , which triggered this incident and he fell,” Rajesh said. Officials at Techno Clean did not want to comment.
Jitendra was the youngest in the family — he was unmarried, and his mother Chandravati, sister Savita and elder brother Rajinder survive him. He lived in Dakshinpuri area of Ambedkar Nagar, Southeast Delhi. His cousin said Narotia had studied up to the fifth grade and began working when he was 20 to support the family. Joint Commissioner of Police (Southern range) Ajai Kashyap said the police have registered a case of negligence and will take further steps as per investigation.

Window cleaners’ safety ensured: Employees claim their equipment is foolproof and checked regularly, companies say staff undergoes rigorous training. The death of Jitendra Narotia, who fell while cleaning the seventh-floor windows of five-star Hyatt Regency Hotel, has brought safety measures in this job in the spotlight. Popularly known as ‘spidermen’, the cleaners do not yet have standard safety guidelines set by the Bureau of Indian Standards. A senior BIS official said, “No such specification is in place in India.” Cleaning companies, however, vehemently claim that the safety of their workers is ensured. Techno Clean, the company for which Narotia worked and that has the contract for cleaning and façade maintenance of Hyatt Regency, says it follows European standards of safety. Incidentally, Techno Clean pioneered the ‘spiderman’ or the abseiling technique and was the first to bring it to India in 1999. 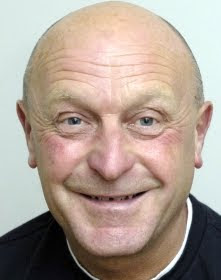 Nurse Freda Holland saved my life: Dad, window-cleaner, husband – but it is only thanks to one woman’s bravery Paul Darling (pictured) is alive today. Mr Darling was just 12 days old when he was rescued from the burning Dellwood Maternity Unit in Liebenrood Road, West Reading, on April 18, 1954. Now he has paid tribute to the woman who saved him, who sadly died last month. Reading nurse Freda Holland, of Cressingham Road in Whitley, had passed away aged 97 on Monday, November 16, after suffering from dementia. Heroine Miss Holland was 41 and working at the unit when she rescued 15 newborns from the blaze. Mr Darling, now of Rodway Road, Tilehurst, attended Miss Holland’s funeral in Reading.

Window Cleaners evidence used in court: William Needham told the court he worked as a window-cleaner during the summer of 2001 and cleaned the windows of various establishments at the Crumlin shopping centre. Mr Needham said he cleaned Abrakebabra’s windows on the Wednesday before the alleged murder and described the windows as being in "a clean state" when he was finished. 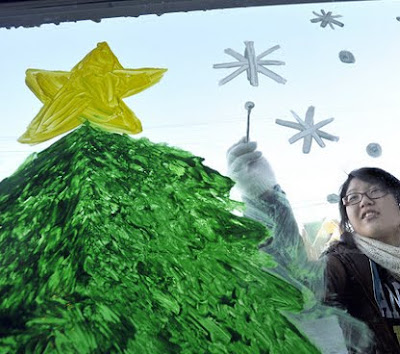 With windows for their canvas, Parkville High students put their creative talents to work during the local business association's fourth annual window decorating contest. The students were among a dozen groups, including several area schools, the recreation center, Scout troops, a day-care and a dance studio, who would decorate windows - in washable paint - for 36 businesses. "This helps give Parkville a sense of identity and makes this community stand out," said Pinder, a board member of the Parkville Carney Business and Professional Association, which sponsors the contest that offers $1,000 in prizes. And, best of all, Pinder said, no one has to fret about post-holiday paint removal. "We are hiring a window cleaner," he said. 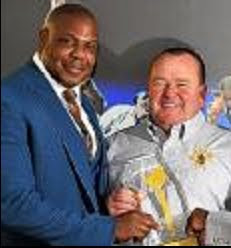 Tom Foley has won the 'unsung hero' category in the BBC's annual sports awards in the south west for his work with the Barton Hill Amateur Boxing Club . Window cleaner Tom, 49, set up the club three years ago after he saw some children playing football with an old Coca Cola bottle. He said to them: "Haven't you got anything better to do," and they told him there was nothing in Barton Hill for young people. He asked them what they would like to see and they said a boxing club. Tom spoke to friends who put him in touch with Dave Grant, 44, who boxed for England as a junior. Together with Lin Gibbs they set up a club at a building known as the Dug-Out in Barton Hill. The club now has more than 300 members aged from six to 60, of 15 different nationalities. Tom said: "I never turn anyone away. The discipline here is second to none. Everybody deserves a chance."

'Window cleaner' burglar behind bars: A burglar who preyed on elderly vulnerable victims by claiming to be a window cleaner has been jailed. Homeless Jon Donoghue, who carried out eight distraction burglaries in Hertfordshire and dozens more in London, was sentenced to four-and-a half years in prison. The 34-year-old, appearing at Wood Green Crown Court last Friday, admitted a range of offences from May and June in Watford, Potters Bar and Borehamwood. Officers from Operation Manhunt, Hertfordshire Constabulary’s team dedicated to catching distraction burglars, arrested him after a public appeal in October. Detective Constable Katie Bish said: “John Donoghue tricked his way into the homes of the elderly and vulnerable in our community by claiming to be a window cleaner. “I hope this sends a message to other criminals who come into Hertfordshire to commit such awful crimes that Operation Manhunt will relentlessly pursue you to ensure you are dealt with by the courts.” 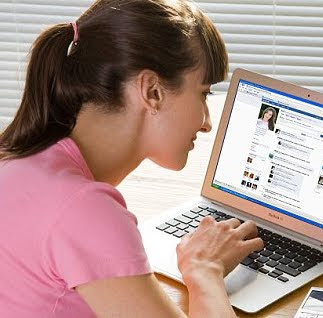 I've got 668 'friends' on Facebook... but I don't know any of my neighbours: And I know I'm not the only one. A friend of mine hadn't lived in his house very long when he noticed a man cleaning the windows of the house next door. He popped outside and cheerily asked 'Can you do mine when you're done?', and when the man replied 'Sure', my friend went inside for a cup of tea and a sit down. Half an hour later, he went outside to arrange payment only to discover that the nice man was not, in fact, a window-cleaner, but his retired, 70-year- old neighbour. It hadn't occurred to my pal that the chap was simply being neighbourly. Of course, he was mortified by his actions but, awkward about what to do, he has pursued the only course of action he could handle: he has avoided his neighbour ever since.

Window cleaner who had indecent images sent to prison: A 27 year old man who used a concealed camera to record a teenage boy using the toilet has been jailed. Michael Park was tracked down by police when he was discovered using an internet forum for people with an interest in young boys. When officers searched his home they found 2,542 indecent images and movies of children on his laptop, phone and CDs – two of which he had recorded himself. Park, a window cleaner, was sentenced to 16 months in prison at Derby Crown Court yesterday. He has been banned from working with children and has to go on the sexual offenders' register for 10 years.

I spoke to the vice-president of the investment arm of a multinational bank. ‘I recall talking to my window cleaner at the height of the banking crisis,’ he said. ‘I don’t often talk to the window cleaner. His 15-hour working week and my 15-hour working day don’t lead to many opportunities for crossing paths. ‘But I had a rare day away from the office and the conversation led to the economy and eventually to my job. In hindsight, perhaps, I should have claimed a more respected career, such as professional puppy murderer. What’s frustrating is that he held me personally responsible for the collapse of the economy.

In that most long lived serie of soap-operas in the UK: - Graeme's on his window cleaning round and enjoys winding Norris up over a 'stolen ladder' (see Pictures below). Norris is embarassed when Graeme produces a receipt for the ladder. This week in a new fascinating twist: Meanwhile, Norris still feels bad about Graeme's broken leg and by way of an apology, he offers to look after Graeme's window cleaning round while he is out of action. Graeme's grateful but Norris is secretly thrilled at the chance to nosey into everyone's houses. 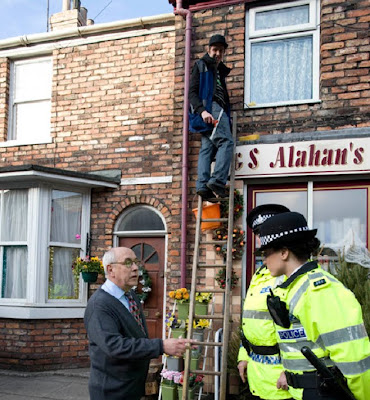