The end of Christmas tipping? More than half of us no longer give cash to postmen, binmen and milkmen: For years it was a time-honoured tradition: families would wrap a fiver around a milk bottle to thank the postman at Christmas, or slip a few quid to the binmen for a festive drink. 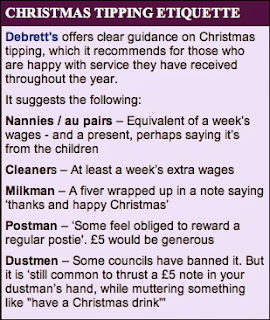 But today as few as half of UK households still tip tradespeople at Christmas, a new study has found.
Just over a fifth of people tip their hairdresser, while postmen are the next most like trade to receive a festive tip (22 per cent) followed by binmen (15 per cent) and window cleaners (12 per cent).

Milkmen are at the bottom of the list (11 per cent) although this is most likely to reflect the dwindling number of residents who have milk delivered to their door. The older generations are most likely to tip, the study found, with 54.8 per cent of those aged 55 and above saying they tip, compared to 45.3 per cent of 18-24 year olds.

But Londoners are the most generous, with 16.9 per cent of those who tip giving more than a tenner, in comparison to 1.3 per cent in East Anglia. People living in the West Midlands are most likely to dip their hand in their pocket for the postman at Christmas, while London residents are more likely to tip their binmen during the festive period than people elsewhere in the country.


Of those who do tip, the majority (65 per cent) give up to £10, 6.4 per cent give more than £10 and 28 per cent prefer to give something other than cash, like food or drink. Budgeting account provider Thinkmoney, who conducted the study, suggested the low level of tipping could be due to increasing pressures on household budgets.

Ian Williams, director of communications at budgeting account provider Thinkmoney, said: 'The Christmas box is a lovely tradition and a great way to show your appreciation to hard working tradespeople. 'But with household budgets under increasing pressure it is perhaps no surprise that less than half of those we questioned leave a tip nowadays.' 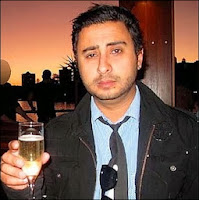 Consumer Action Law Centre chief executive Gerard Brody said 90 people had complained about the company in small claims tribunals in NSW and Victoria in recent years, with many saying it had not delivered on its promise. But most appeared to have privately settled their disputes with the business, with only one resulting in a reported decision.

Mr Brody said many consumers came to the centre with similar claims of misconduct, including high-pressure door-to-door sales tactics. But they often settled their disputes, agreeing to keep the matter confidential and leaving future claims to be treated in isolation. "We try and negotiate individual outcomes for all those consumers, which takes time and effort and it's not the most efficient way to resolve the issue."

Mr Brody said consumers mainly relied on laws against unconscionable conduct to take action against businesses, which was difficult to prove: "There shouldn't be such a high bar, particularly where numerous people are suffering significant consequences that are similar. That should be enough to show there has been unfair trading and a regulator could go and take action."

A Consumer Affairs Victoria spokesman said the watchdog had received 32 complaints about Publicity Monster since July 2011 and continued to monitor it regarding alleged consumer law breaches. "As with any investigation, Consumer Affairs Victoria relies on assistance from the consumers involved." He said the body could investigate and enforce laws against complaints that "suggest systemic issues".

Mr Sabre, also known as Timothy Said, was convicted of destroying, erasing, altering or inserting data into a Commonwealth computer in 2001 and sentenced to 450 hours' community service. He was stripped of his Google accreditation last August after Fairfax Media reports about Publicity Monster.

Luke Dunsford, who runs a window-cleaning business, gave his credit card details to the company over the phone. He was told Publicity Monster could bring more people to his website. Mr Dunsford does not know whether web traffic grew, but said the number of customer phone calls and emails he received since then had not.

He was told he had to contact the company to cancel his account but assumed it would expire when he did not renew the contract at the end of the year. The company then contacted him saying he owed it more than $3000 – double what he had initially paid. He began action against it in the Victorian Civil and Administrative Tribunal in July. "I'm quite happy to take this as far as I can and not do a deal with Publicity Monster so they can't do that sort of thing [to other people]," he said.
Posted by Karl Robinson at Monday, December 16, 2013