Morrisons stop washing windows to save cash - It’s a sign of the times when a supermarket has to cut back on its cleaning bill to save cash, but that’s what mucky Morrisons is doing this winter. In a triumph of bizarre logic, bosses have decided to cancel window cleaning at all its stores in a war against slipping sales, which dropped by 2.4% in the third quarter of this year. The argument Morrison’s have given is this. ‘The weather forecast for this winter shows an increase in snow and frost.’ And as we know, snow is CLEAN. Except when it melts and becomes like grit filled human effluence.

They added: ‘Morrisons has decided to reduce window cleaning at stores because it is less important to customers at the darkest time of the year, because the water that runs off windows can be a slippage hazard in the winter, and so we can spend money on maintenance activity that our customers do care about at this time of year.’ Like tinsel! (Covered in dirt). The cut came into effect on the 2nd December and window cleaners won’t be back again until February, when presumably, the shop will be just called ISONS, and coughing, diseased staff will have desperately scrawled ‘CLEAN ME’ all over the front of the store. Don’t know about you, but I might take my business elsewhere…

The supermarket group Morrisons has cancelled window cleaning at its stores for two months as it battles against declining sales. In an email seen by The Telegraph, Maintenance Management Ltd (MML), which handles Morrisons’ facilities, told contractors that the retailer is facing a “tough end of year in respect of their budgetary position”. As well as the “financial constraints”, MML claimed that window cleaning was cancelled because “the weather forecast for this winter shows an increase in snow and frost”.

The window-cleaning ban, which was launched at the start of December, will run until February 2, which marks the end of Morrisons’ financial year. Last month, Morrisons reported a disappointing 2.4pc drop in like-for-like sales for its third quarter, but pledged that full-year profits were still in line with expectations. A spokesman for Morrisons said the “budgetary position” referred to in the email was the store maintenance budget, not the company’s wider financial position.

Morrisons said: “Morrisons has decided to reduce window cleaning at stores because it is less important to customers at the darkest time of the year, because the water that runs off windows can be a slippage hazard in the winter, and so we can spend money on maintenance activity that our customers do care about at this time of year. “We will be restoring the normal service in the spring and the reduction does not affect windows easily seen by customers."

Morrisons cuts window cleaning to save cash: If you can't afford to throw soap and water at your shop windows, you're in trouble. Supermarket Morrisons says it won't scrape much of the winter grime away until February to save corporate pennies. Though full-year profits are on target, Morrisons sales have been wiped lower thanks to highly aggressive Aldi and Lidl competition. Where's the sparkle factor for Morrisons now?

A few sales smears - There's a certain lack of gleam. Like Asda and Tesco, Morrisons occupies the dangerous sales middle ground. Dangerous because its territory is being eaten into from both ends: Aldi and Lidl are gnawing their way up one side, while up-market Waitrose hogs the top shelf for itself. Leaving mainstream operators like Morrisons with an increasingly pared-back market share. Morrisons, Sainsbury's, Asda and Tesco all lost market share in the last three months thanks to this combination of cheap and not-so-cheap competition. Sainsbury's is managing to do rather better - the only Big Four grocer to increase market during the whole 12 months. Morrisons is further disadvantaged by its lack of an internet sales operation. This is changing, with an online service to be part-launched in January. But it's late.

Loyalty pays -  Expect the usual teething issues. The roll-out won't actually connect with a 50% of UK households till the end of 2014. Morrisons is also let down by a lack of a loyalty discount scheme, adroitly deployed by Tesco and Sainsbury's. In the meantime, Morrisons says customers shouldn't mind window grime at the darkest part of the year. Water runs off windows it says and "can be a slippage hazard in the winter; and so we can spend money on maintenance activity that our customers do care about at this time of year."

Morrisons is also upping prices where it can. Or reducing sizes. An eagle-eyed foray into Morrisons yesterday saw its mainstay Savers All Purpose Cleaner product held at the same price (25p) but the size whittled down from 750ml to 500ml. Keep an eye out for other cost-cutting measures. Currently Morrisons shares are selling at 261p, down from 302p in mid September, a 13.5% fall. Much hope, then, rides on the 'Go on its Christmas' ad campaign, starring Ant and Dec. 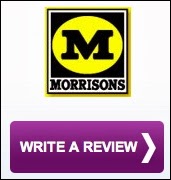 Morrisons Reviews: Do you shop at Morrisons? Do you live near a Morrisons store, but shop elsewhere. Tell us what you think of Morrisons, their staff, their food and anything else you would like to include.

Or have your say here at the Morrisons facebook page. You know you want to!

Is this enough to boycott the store or would you shop elsewhere? Have your say below in the comments section.

We have several different franchised drug stores over here in the States. None of them use Window Cleaners. They are all totally filthy. Many supermarkets are just the same.