Window Cleaners Getting In The Christmas Spirit

Amersham window cleaners pledge to donate Christmas tips: A father and son window cleaning duo are putting other people’s generosity to good use by donating all of their Christmas tips to charity. Terry Gurr and his son Aaron of Amersham based Highflow Services decided to donate every penny of the money from happy customers to children’s charity Beat Bullying. And the squeegee-toting pair are also giving away all of the wines, chocolates and other goodies received on their rounds at a charity tombola in Old Amersham Memorial Gardens this Saturday as part of the town’s Christmas celebrations.
Terry said: “My son just turned round to me recently and said he was going to give away all his tips this Christmas, so we both decided to do it and give them to charity. “Both my wife and I have experienced bullying in the past and it’s a great cause for it to go to. “We want to encourage people to donate items to the tombola so we can raise as much money as possible.” To donate an item for Terry and Aaron’s tombola at this weekend’s Christmas celebrations in Old Amersham, pop in to Bojangles Cafe on Hill Avenue, which is taking donations.

Elves Drop In on Riley Patients: Little patients at Riley Hospital for Children at Indiana University Health got a holiday treat as Santa's Elves rappelled down the windows of the Simon Family Tower Thursday morning stopping to wave at patients on every floor.

Father and son window cleaning rivals help Boston flood victims: Father and son window cleaning rivals David and Andrew Willis came together to help flood hit properties in Boston. The pair – of Washforce and Clean 143 respectively – were able to clear the standing water from the offices of the Boston Standard as well as many other businesses in the area. In the video above the pair explain their role in the volunteer clear up effort.

The rise of loneliness in 21st century Britain: Christmas can be the loneliest time of the year for older people and those living on their own. But loneliness is a growing problem all year round, not just during the festive season. Huddersfield has a number of initiatives, including luncheon and over-sixties clubs; church groups; the OWLS weekday leisure club; and the University of the Third Age. And the work of the Community Church continues all year, with befriending groups for everyone from mother and toddlers and refugees to older people and vulnerable adults.
The church has to fundraise to run the groups, which are mostly free, and the annual Christmas lunch alone costs over £1,000.  This year it was supported financially by a number of local organisations and individuals, including a firm of window cleaners, a 92-year-old well-wisher who sent a cheque for £500 and a bereaved family who asked for contributions instead of funereal flowers. “I think it’s wonderful that it has been supported by the wider community and we have so many volunteers who come together on the day,” said Charlene.  “It makes it more special somehow.”

Window Wonderland - a look at Christmas window displays from John Lewis, Harrods, Selfridges and more: Georgia Barretta-Whiteley, head of design at shopper marketing agency Saatchi & Saatchi X, casts her eye over the Christmas window displays of London’s biggest retailers. At time of writing, the Christmas season is well (but not truly) upon us. Only in retail land has its glistening, cinnamon-tasting, sprayfrosted, white fur-lined grip really taken hold. The capital’s shopping districts now have their main arteries blocked by rubber-neckers from all over, walking into lamp posts, stepping backwards into traffic and spilling noxious toffeenut latte over oncoming, equally-as-distracted pedestrians. The Christmas store window extravaganza has begun, and what follows is an attempt to quantify the magic of the top seven heavy-hitters in central London.

Opening windows: Midtown stores add a touch of glass for holidays - 'Tis the season for window shopping, and spirits aren't the only thing the city's world-famous storefronts are making bright. Above Macy's (Don't miss) An enormous crystal tree in a forest of jewel-encrusted deer, foxes and other woodland creatures, or the LED spider web that transforms into a perfect snowflake. Check out the touch-screen snowflakes in the interactive window, which become fairies or shatter animated icicles at the tap of a finger. 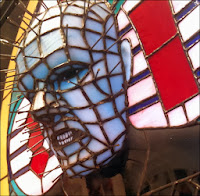 Gift Guide: 'Hellraiser' Stained Glass Window - A handmade, 3D stained glass window of Pinhead from Hellraiser. Amazing, right? Designed by Nicole Cantu for the Guzu Gallery in Austin, Texas, it's big, it's bold, and it's expensive. I want it. Is it wrong that I want to replace a regular stained glass church window with this one, just to see what happens? I have seen some of those religious windows - Pinhead is way tame compared to a lot of them. Sadly the stained glass window is only available for local pickup. Maybe a road trip is in order? $8,000 from Guzu Gallery.
Posted by Karl Robinson at Tuesday, December 10, 2013