Manitowoc man finds comfort in cleaning windows: It was below freezing during a recent Tuesday morning. The sun began to rise over the rooftops and chased the blue hue of twilight away. Residents in cars hustled around downtown ready to start their day in warm offices and workstations. One man, however, walked around in the frigid air without a care. Mike Hecker, 63, lifelong Manitowoc resident and Lincoln High School graduate, has been washing windows for area businesses and residents for the past 34 years.

He can be seen riding his bicycle with a trailer full of cleaning supplies up and down the streets of downtown Manitowoc while puffing away on a Dutch Masters cigar, regardless of weather — sweltering heat or chilling cold and snow. (Rain is the only exception.) “If people can’t dress warm for work, they should suffer,” Hecker said, with plumes of cigar smoke and breath vapor billowing out his mouth.

Hecker began his solo window-washing career shorlty after his employer closed, according to Hecker. He took his employer’s customers and Hecker has been washing windows since. Five days a week, Hecker washes windows for 108 customers on a route — charging 50 cents per window. He said his routes are different each day and his longest route is 15 miles. The routes take about a couple of hours to complete. “It’s better than sitting around getting stiff with arthritis,” Hecker said.

There is competition to Hecker’s work. He said there are other window cleaners but most are from out of town. Downtown businesses aren’t his only work. He also washes windows for houses in residential areas, charging $25 per house. Hecker promotes his work through word of mouth. “I don’t know why people don’t take the local ones,” Hecker said. “One year, I did 36 houses, last year I only had one house.”

Hecker’s customers said they enjoy the work he does and his consistency. Lisa Genskey, owner of Washington Street Antique Mall, said Hecker does good work and is prompt and reasonable. She said he hasn’t risen his price in 11 years. Others like June Kramer, store manager of Book World in Manitowoc, admires him for his work ethic. She said Hecker has washed her store’s windows and shoveled her snow for more than 10 years. “I give Mike credit because he runs his own business, does it year long — all four seasons,” Kramer said. “He washes my windows and shovels my snow. I can count on him to get the job done. That’s the main thing with Mike.”

Outside of work, Hecker enjoys watching open court cases at the Manitowoc County Courthouse. He particularly likes to watch cases about drunken driving and drug possession defendants. He said the cases are reminders to not slip into old habits. Hecker was an alcoholic for eight years, but recovered and hasn’t had a drink in 26 years. “I don’t miss the poison,” Hecker said. After 34 years of washing windows, Hecker said he doesn’t plan on retiring soon. “If I retire, people got to find something for me to do,” Hecker said. 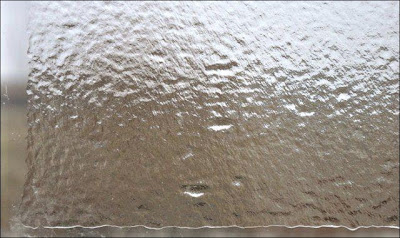 Martyn Wulfran of Woverhampton, UK shows us the effect of trying to waterfed pole in freezing conditions.

Metro Detroit braves wicked winter weather: Firefighters, utility line workers, window cleaners — and those guys waving signs advertising $5 pizzas — are among the unlucky souls required to work outdoors when temperatures fall through the floor. The arctic blast that hit Michigan beginning Sunday sent temperatures plummeting to 17 below in the Upper Peninsula town of Gwinn and to 7 below in Ann Arbor, and the deep freeze is expected to continue throughout the week. Detroit bottomed out at 1 below Tuesday morning, according to the National Weather Service at White Lake Township.
For window cleaner Rodney Turman, the old joke is that his business has "its ups and downs," never more so than when he's balanced on a ladder in high winds on a frigid day. "The biggest thing is that you have to dress for it," said Turman, business development manager for Transparent Window Cleaning in Rochester Hills. "You layer up … and make sure your neck is warm and protected from blasts of cold air. You also must pay attention to the weather before you even go out the door." To keep warm, Turman plunges his hands into his cleaning bucket filled with warm water. "I wear thin plastic gloves to keep them from getting wet," he said. "Unfortunately the thicker, warmer gloves are too bulky to do a good job of cleaning." And all bets are off when it gets windy, Turman said. "If it hits 20 mph or higher, it's just too dangerous out," he said. "That's when we only clean windows inside the building."

Chicago Winter: Wind Chill Advisory Issued, Bitter Cold Returns - Chicago's bizarrely -- and historically -- mild winter took a turn for the bitter over the weekend as the coldest temperatures of the season to date arrived in the area. The National Weather Service has issued a wind chill advisory for all of Cook County and a number of its surrounding counties that goes into effect at 6 p.m. Monday and will continue through 10 a.m. Tuesday, the Chicago Tribune reports. The frigid temperatures are the coldest the city has experienced in two years, according to NBC Chicago.
Cold winds in the city exceeded 60 mph in some areas Saturday evening, according to ABC Chicago, and approached 50 mph in other spots throughout the city and low temperatures in the single digits Sunday evening were accompanied by wind chills as low as 20 degrees below zero. The wind chill Monday evening again reached as low as 20 degrees below zero.

This weather is a cold fact: Matthew LaBaire was close to his limit washing windows outside at the Worcester County Sheriff's Department civil process office on Main Street. “My hands are frozen,” he said. “Right now I can't feel them.” Mr. LaBaire works for Stephen's Window Service. He said the cold was making it difficult to wash the windows but it was the only day he could do the job. He was wearing gloves but his hands were saturated. Mr. LaBaire said he uses windshield washing fluid to clean windows in the cold but with wind chill temperature as low as -8, he had to wipe off the window quickly to prevent ice from forming.

WEST NORFOLK: Your views on the snowy shutdown - Parents, students and workers across West Norfolk refused to be stopped in their tracks by Sunday night’s snowfall as schools closed and buses ground to a halt. Mark Allison, from Middleton, a self-employed window cleaner, said: “It hasn’t really affected me - the roads are a bit slushy, but I’ve got a truck so I just get on with it. I have to come it, I’m self-employed. If I don’t work, I don’t make any money.”

Siouxlanders grapple with numbing cold, subzero temps: Bob Reynolds, of Clear View Window Cleaning in Sioux City, dressed in layers Monday, but it still wasn't enough to prevent the numbing cold from sending him back inside. "I'm only out here for 15 minutes at a crack," he said. The high on Monday was 9 degrees, registered at 2:13 p.m., the first day the region failed to reach double digits since Feb. 8, 2011, according to the National Weather Service. The temperature at one point Monday morning dropped to minus 1.
The cold weather pattern enveloped a wide section of the upper Midwest, producing a string of negative temperatures and wind chill advisories from Wisconsin to the Dakotas. A temperature reading of minus 9 in Mason City, Iowa, combined with gusty winds to make it feel like 34 below zero on Monday morning.
Waiting for the white stuff - Recreation, snow removal companies missing snowfall: As January nears its end, many miss the winter staple of fluffy white snow. But for some, the longing is much more than nostalgia — it's business. Plowing companies, winter recreation outlets and others in snow-loving industries all suffer. As of press time Tuesday, there had been little to no accumulation in most of Cook, Lake and Kane counties — a problem for businesses that rely on snow. Making this year's record-breaking lack of snowfall even more puzzling, the 2011-12 winter after the February 2011 blizzard had far less snow. That makes two tough years in a row. "I said, it can't be like that again," said Charles Miller of St. Charles, whose wife owns Charles Miller Lawn and Snow. Miller recalled thinking it would be highly unlikely to have two winters in a row light on snow, leading him to buy a $10,000 piece of equipment at the season's start. To bring in some revenue for his company and his employees, "I've been doing mulch, believe it or not … in December and January," Miller said. "To me, that's unheard of."
Others have to wait, like Joe Paglini Jr., who along with his father runs Park Ridge Snowplowing. "All you can do anymore is just laugh," he said of the mild winter that has kept his small fleet of snowplows unused. "Everybody gets ready and the snow just doesn't come." Half of Paglini's business involves snow removal in and around the near northwest suburb, and he said he's had to sell two of his nine trucks. The gas station and auto repair shop that constitute the remainder of his business have also suffered, he said. "Without snow, there are less accidents," he said. "So the body work has been dead."
John Peterson, who owns a snow removal and landscaping business in Lake Bluff, also depends heavily on snow — its removal accounts for about 60 percent of his annual revenue. Peterson said he expects this year to be even worse than previous years with little snow. "I'm not going to hold my breath," he said. "We may get one or two snows, but it's not going to be enough to make up for the season."
Chris Geldermann, 32, who manages C&E Outdoor Services in Glenview, has had to expand his snowplowing business to include window power-washing and holiday-lights cleaning, among other services. "If all I did was snow removal, I'd be homeless," said Geldermann, who also has a second job. Tim Metz, trail boss of the Elgin Cold Ducks Snowmobile Club, said members — who are from throughout the Chicago suburbs — are heading to Wisconsin or Michigan. That means the club's system of trails in western Kane County go unused, he said. "I wake up in the middle of the night to look out the window," Metz said. "I see the moon still shining, with no snow."
Posted by Karl Robinson at Wednesday, January 23, 2013