The Most Hated Window Cleaner In The UK

Brother of EastEnders Gemma guilty of murder: The brother of EastEnders actress Gemma McCluskie has been jailed for life for killing his sister and dumping her dismembered body in a canal. Tony McCluskie, 36, was a cannabis addict who had resented being overshadowed by his 29-year-old sister throughout his life. He murdered her during a blazing row after he left the taps on and flooded the bathroom. Window cleaner McCluskie spent up to three hours cutting off Gemma's head, arms and legs with a knife and a meat cleaver in an attempted to cover up the crime.


Over the next four days he posed as the concerned brother desperate to find his missing sister - even posing for The Sun holding an appeal poster. But he was finally forced to face the truth when his father and brother identified him from CCTV footage taking the suitcase containing her body to the Regent’s Canal in Hackney, east London. McCluskie gave police a vague account of his movements, claiming he could not remember the killing but must have lost control when his sister tried to throw him out of the family home in Shoreditch. He also tried to blacken her name by saying she had bullied and abused him for years. The jury rejected his defence and convicted him of murder by a majority of 11-to-one.

His father Tony snr was in court as the verdict was announced. His mother, who contracted MRSA after an operation to remove a brain tumour, remains desperately ill and requires 24 hour care. McCluskie had few friends and had drifted from job to job while his sister was talented, popular and outgoing. While she quickly found success as Kerry Skinner in the BBC soap Eastenders in 2000 at age 17, he struggled to get work as a bricklayer. He spent most of his time staying in his room, smoking cannabis and drinking up to ten pints of lager and a few shots of tequila a night. In 2002 their mother Pauline McCluskie threw him out of the house because he was constantly arguing and shouting at her and Gemma. McCluskie went through a series of temporary labouring jobs before being taken on by Principle Cleaning.


He became an ’abseiling window cleaner’ and part of his work involved cleaning the glass on the outside of Lloyd’s of London in Lime Street. But by March last year his life was falling apart. He dreaded going into work after his colleagues ostracised him because they believed he had been over-promoted and had informed on two of them for not wearing safety harnesses. His relationship with a single mother-of-one Teri Arnull had ended after a series of rows and an incident when he slapped her in the face. He began spending even more time alone in his room, smoking between 10 and 15 spliffs of powerful skunk weed a day. McCluskie would roll a joint before he even got out of bed in the morning. His sister would criticise his pot smoking and on March 1, 2012, he got into a row with her after she found the bathroom sink overflowing because he left taps running.


He stayed in bed while she went out to video a friend’s child singing in a choir at the re-opening of the Royal London Hospital in Whitechapel. At around 1pm she was overheard by her friends ringing him to tell him he was sick of his skunk habit and he should move out. Gemma said: "He’s ruining my mum’s house. It’s not fair. Mum worked hard to get her home together. "It’s because he’s permanently stoned. He puts a spliff in his mouth the moment he wakes up and doesn’t know what he’s doing. Gemma, who was working as a barmaid between acting jobs, was last seen returning home to the flat in Pelter Street, Shoreditch, east London, at 1.50pm. A neighbour heard her sobbing at around this time and it is thought he killed her within an hour of her return. McCluskie spent the rest of the afternoon sending and receiving ’flirtatious’ texts with an old female schoolfriend and chatting to his ex-parter. The next day on March 2 he texted his sister, pretending he did not know she was dead. His text read: "Ring me when you get this message. What you having for dinner. Are you working tonight?"


In another he added: "Hi gem just letting you know I’m up the hospital mum is doing really good and the doctors are pleased with her... going to look at her throat and swallowing today! Love ya xx." Detectives say this is the only message out of the dozens recovered where he told Gemma he loved her. Neighbours heard him repeatedly shouting out: "I’m sorry Gemma, I’m sorry, I must have been out of my mind." That night he booked a taxi from a firm near the flat and was caught on CCTV loading a bag into the boot. He asked McCluskie what was inside and he replied: "My sister." A private camera in Thrasher Close, Hackney, captured him dragging the suitcase backwards down the towpath at around 10.55pm. The following day McCluskie looked after his ex-girlfriend’s young son before finally going to police to report his sister missing.

He continued to pretend he had no idea what had happened and fed the police false leads in an attempt to divert them to other suspects including Gemma’s former boyfriend and a kebab shop owner. McCluskie even claimed that his mother, who was in hospital, had told him she was visited by Gemma the day after she was killed. On the afternoon March 6 he took advantage of a hoax ’ransom demand’ made by a prank caller to continue his charade. His story began to unravel when Gemma’s torso was spotted floating in the Regent’s Canal near Kingsland Road, Hackney the same day. Over the next two weeks her arms and legs were also recovered from the waterway. Police also found Gemma’s blood and body tissue on a knife at the house in Pelter Street. McCluskie was recorded making phone calls from prison telling a friend that the police were trying to "stitch him up".

But in April his father Anthony and younger brother Danny, now 34, confirmed it was him on CCTV footage bundling the suitcase into a taxi. McCluskie now changed his story and said he could not remember what happened. In one call he told his father: "I can’t remember any of it Dad, it’s just the things that actually driving me f***ing mad, Dad." On 20 May he told Anthony McCluskie: "I can only imagine that I strangled her dad." When his father told him that it was important they found Gemma’s missing head, he replied: "Dad, I know. And I know I put everything in that canal." After her head finally turned up in September last year an expert concluded she had been hit at least three times with a blunt object.


Professor Susan Black, who examined the remains, said that McCluskie made up to 100 cuts and slashes with a knife and meat cleaver as he struggled to dismember her body. On 28 September McCluskie finally admitted he had killed his sister but claimed he had no memory of the attack or cutting up and disposing of the body. He told jurors that he had a flashback of feeling angry when Gemma picked up a knife and threatened to stab him and his ex-partner if he did not move out of the house. McCluskie said: "All I remember is grabbing her wrists. I can remember I bent her wrists to drop the knife to the floor. After that I have no memory at all." He claimed that Gemma had repeatedly swore at him, humiliated him and made him feel worthless by criticising his appearance. "She said I dressed like a tramp. I smelled, I didn’t wash, I was unhygienic, I was dirty," he added. Dr Michael Kopelman, one of the world’s top experts in amnesia said McCluskie’s memory loss story was inconsistent because that was not the first explanation he gave to police. In his closing speech to jurors, Jeremy Dein QC had described the killer as "a volcano waiting to erupt." McCluskie, of (23) Pelter Street, Bethnal Green, east London, admitted manslaughter but denied murder. 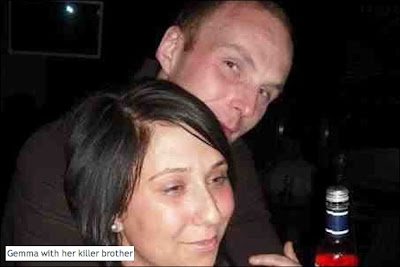 The brother of the former EastEnders actor Gemma McCluskie, whose mutilated remains were found in a London canal, has been jailed for life with a minimum term of 20 years after being convicted of her murder. Tony McCluskie, 36, a window cleaner who was "hopelessly addicted" to skunk cannabis, had admitted manslaughter but denied murder, claiming he had lost control during a row with his sister and had no memory of having killed her.
Posted by Karl Robinson at Thursday, January 31, 2013