Nonchalant window cleaner chomps saveloy and chips as flames consume his car: The dilemma of what to save in a fire was answered decisively by a sports fan when his car burst into flames – golf clubs. The high street in Epping was brought to a halt at lunchtime on Tuesday afternoon as astonished passers-by stopped to watch the drama. David Ayres, of Congreve Road in Waltham Abbey, was returning from a round of golf when the fire broke out in the engine of his Citroen Picasso. After unsuccessfully battling the flames with a small extinguisher, he bought a saveloy and chips from a nearby fryer and calmly ate them while waiting for the fire brigade to arrive. 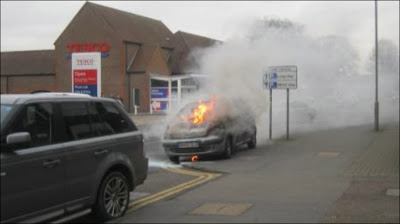 Smoke blocked the high street as officers from the nearby fire station brought the blaze under control, but the car was already wrecked. The 28-year-old window cleaner said: "I noticed smoke coming into the cabin and stopped, and when I checked under the car I saw a small fire. "I tried to put it out with an extinguisher someone gave me but it just seemed to make it worse. "I grabbed my golf clubs and got out of the way. "There was nothing else I could do. Someone had called the fire brigade so I went and got some chips while they were coming."
Posted by Karl Robinson at Tuesday, January 08, 2013