Washing away the old year: A child looks on mesmerised as window cleaners dressed as a goat and a monkey go about their task in Tokyo. According to the Chinese zodiac calendar, 2015 is the year of the goat or sheep and 2016 is the year of the monkey. The duo dressed up as monkey & goat commemorated the end of the year by reading some puns. The pair then climbed to the top floor of a skyscraper and got to work making the windows shine. 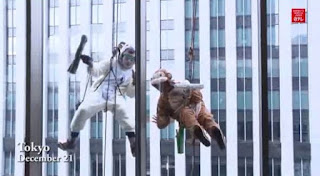 With just 10 days left in 2015, Japanese window cleaners traditionally dress in costumes representing the Chinese zodiac animals for this year and the next. A worker dressed as a sheep (2015) and another in a monkey costume (2016) started from the rooftop of a 15-floor building, cleaning as they worked their way down.

This is unique, amazing and very funny cleaners! Wearing costume while doing this window cleaning is very difficult but, I see them enjoying also.