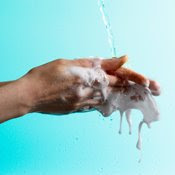 MRSA/Methicillin Resistant Staphylococcus aureus was discovered in 1961 in the United Kingdom. It made its first major appearance in the United States in 1981 becoming prevalent among intravenous drug users. MRSA is often referred to in the press as a "superbug."

As the cold and flu season continues to bloom, I find it is necessary to talk about antibiotics and our abusive relationship with them. The use and promotion of antibacterial household products is driven by the fear of getting sick or even just the fear of germs themselves. We should ask each other if this is rational. If we take antibiotics carelessly we can make ourselves more susceptible to illness. Also, we need to know when to take antibiotics as they are not effective in combating a viral infection or one of the fungal varieties. If you were to take an antibiotic for these types of infections, you would not resolve the problem, you would just weaken your body's defenses against another illness. We often hear the term, "Kills 99.9% of bacteria." Well, have you ever wondered about the other .1%? This special portion of the previous population is resistant to the antibiotic material used in the sanitizing substance. These bacteria have been given the informal name of a "Super Bug." Super bugs are multi-resistant bacteria that are resistant to the antibodies that are specifically designed to exterminate said bacteria. These remaining bugs are free to roam and multiply. One type of infection that occurs due to this over exposure or abuse of antibiotics is the Methicillan-Resistant Staphylococcus Aureus, or MRSA for short. This infectious strain often rears in hospitals and even schools. According to Medical News Today, in the past decade the rate of MRSA infection related deaths has risen by 1,400 percent. In 2005, approximately 19,000 deaths were linked to MRSA infections and it is estimated that nearly 90,000 people in the United States may be infected by the Super Bug. These rates will only be accelerated as we continue to socially mistreat and over treat our fears of getting sick.
So, this being said, I would like to take this chance to offer some suggestions for maintaining a healthy, bacteria-friendly immune system. The first thing you can do is reduce the amount of antibacterial soap and aerosols you use but continue to use soap for basic hygiene purposes. Secondly, make sure we have properly diagnosed our symptoms so as to not mistreat our infections causing further illnesses. And finally, we need to refrain from the use of antibiotics unless absolutely necessary. In this situation, take the full course of antibiotics in order to kill the malicious bacteria more entirely to prevent the reoccurrence of the infection later on. By following these very broad guidelines, we can maintain healthy, properly functioning and ultimately strengthen, our immune systems.

Hand washing & frequent wetting & drying has now been linked to dermatitis. Increased bacterial count in hands and colonization of antibiotic resistance developing in the hands of workers. Study found that dry nurses' hands were twice as likely to be colonized by bacteria. 58% of healthcare workers are said to be colonized with MRSA. Some bacteria with a genetic pre-disposition to resistance to antibiotic properties will survive. When these resistant bacteria divide, they pass their resistance on, creating entire colonies of antibiotic-resistant bacteria colonized in the healthcare workers hands.

Cuts and cracks in the skin are one of the main entry points for MRSA. The skin’s protective barrier is compromised when the skin is dry, and, as many dry skin sufferers tend to scratch itchy spots, they may have scrapes that, although not visible as a cut, nevertheless leave one exposed to bacteria. Traditional moisturizers mask the dryness by coating the skin, but they do not actually provide the needed moisture or promote healing.
A shielding lotion bonds with the outer layer of the skin to form a protective barrier that locks in the skin’s natural moisture, prevents direct contact with bacteria and other irritants, and thereby heals dry skin. Although skin infections are often mild in themselves, they can spread to the blood causing serious illness. If you have dry skin, protect yourself now with a good shielding lotion.