Window Cleaning Super Heroes & The Story Behind Them

Super heroes surprise hospital pediatric patients: Super heroes delighted children and staff members at Ministry Saint Joseph’s Children’s Hospital by rappelling down the side of the building and greeting pediatric patients and their families Monday. Window washers Jeff Henderson, Tim Taggart and Patrick Wallin of Brite-Way Window Cleaning volunteered to dress in Batman, Spider-Man and Captain America costumes, respectively, and lower themselves down the side of the hospital’s tower to the children’s patio.


Hospital staff members approached Brite-Way about the idea after hospital facilities director Randy Wagner presented a video of super-hero clad window washers rappelling at Children’s Hospital of Pittsburgh. “We’ve worked with Brite-Way for a number of years,” said Julie Schafer, secretary for environmental services at Ministry Saint Joseph’s Hospital. “We’re glad we’ve developed a relationship with them that we felt comfortable asking them to do something out of the ordinary.” “It’s toward Christmas, and there’s a lot of little ones in the hospital, and they aren’t going to have that great of a time,” said Taggart, who wore the Spider-Man costume he used for his grandson’s birthday party.


Schafer said patients and hospital staff members were excited to see the super heroes, and families called the hospital Monday morning to find out if Batman, Spider-Man and Captain America still planned to visit despite fog and light rain. Pediatric patient Logan Soderlund of Rhinelander watched the climbing ropes excitedly as he waited for the super heroes to appear on the children’s patio. “He was definitely surprised,” said Logan’s father, Sean Soderlund. “We watched ‘Avengers’ last night.”


The super heroes greeted and took pictures with patients and families at Ministry Saint Joseph’s Children’s Hospital before descending the hospital’s main tower. Wallin, who dressed as Captain America, said it was nice to do something for the community and brighten the children’s day. “I’m really happy to be part of this,” Wallin said. Taggart said he hopes to participate in super hero events yearly.

Superheros save the day for hospitalized children:  It was a super experience for some children in Marshfield today, as they saw some superheros outside their hospital windows. Heidi Giese is St. Joseph’s Hospital’s Manager of Child Life Services. She says a routine building maintenance project was a lot of fun for about seventeen hospitalized children in their pediatric unit.  She says, "The guys cleaning the windows dressed up as Spiderman, Batman, and Captain America and they rappelled down the side of the building so that all of our pediatric patients in the building were able to see that.”

Giese says it was a special way to brighten the day for some kids who are not feeling well.  “A little two-year-old that was looking at the window and looking outside. When they jumped down onto the backyard patio, his eyes got huge.” St. Joseph’s Hospital had heard of another children’s hospital doing this with great success, and contacted Brightway Window Service to see if they would put on the costumes... which they gladly did for the kids.

The story behind the story. Why window cleaners dressing as Super-Heroes are becoming so popular. See the blog on this event here.

Why Rico is a superhero (Grand Rapids, West Michigan): Super heroes were rappelling down the wall of glass windows on the 14-story Helen DeVos Children's Hospital, five daring window washers dressed as Hulk, Flash, Superman, Spider-Man and Captain America. Veteran MLive and Grand Rapids Press photographer Chris Clark stood below that day, snapping spectacular photos alongside other local media. Then instinct took over and told him one thing. "Get inside." What Chris wanted to find was what journalists at MLive always want to show you: What's happening on the inside. Where it matters most. The photos he captured show photojournalism at its finest. Another special moment in the life of West Michigan was captured, documented, shared. 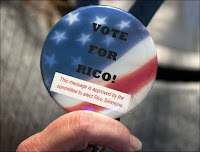 There was one photo so poignant it stayed with me and became a part of me. It makes me happy and thankful each time I think of it, which is often. It shows a 13-year-old boy, Randall "Rico" Simmons, holding a simple message he printed on note paper and then pressed against the window for the superheroes to see. "Give me 5! " the message said. The same photo shows Rico's hand touching the glass inside, met by a superhero's gloved hand on the outside. The arm of another superhero reaches up for the next high five with Rico. I like to think of that quartet of hands as a bouquet,

I wanted to meet Rico, the young man whose simple sign touched me. So last week Chris Clark and I went back to DeVos Children's hospital to see Rico and his mom, Tina Simmons, to tell you and show you more about this boy and his family. Rico is a Tri County Middle School student who's been fighting cancer for much of the year, through multiple rounds of chemotherapy.  A tumor in his hip shattered his bone, so the doctors had to build Rico a new hip. After 18 hours of surgery on Sept. 6, Rico emerged with custom-made left hip, sized for him to grow into, and held together with 19 screws, 3 plates and 2 rods. His incision stretches from his back rib cage to his ankle.


The hospital became Rico's and Tina's second home for the past three months. Finally, on Nov. 15, Rico and Tina got to go home to Howard City, reuniting with Dad, Aaron, and with sister, Julia, 17. Rico is continuing with round three of chemotherapy to fight the cancer. He will be getting around with the help of a wheelchair and walker, and he is staying up on his school work with the help of an at-home teacher. School is important to Rico. He has his goal firmly fixed: college. "Yale or Harvard," Rico said of his top choices. His career interests: "Art, music, architectural engineering or video game engineering."


"He's my superhero," Tina said about her son last week as she sat on his hospital bed shortly before leaving for home. "If I could just have a pinch of his strength, I think I could conquer the world," she said, her pride and love beaming in her eyes. She said Rico has been a good mentor to other children fighting cancer at the hospital. Rico said it was surprising to learn the photo had touched so many people. "I didn't know how popular the photo was to be honest. It was crazy when I heard it was all over school, too." The photo gallery was popular on MLive, and thousands of you viewed, liked and shared these photos on Facebook and elsewhere. I wanted Rico to know how much he touched me and our readers. About how it's my favorite photo of the year. Because it shows us at our best. When we try to reach. Touch. Connect.


"I just remember idolizing superheroes when I was little," Rico said. That's why he reached out that day when the superheroes passed his window. "It gave me a flashback to when he was little," Tina said, remembering how he pumped his fist when the "Give me 5!" sign worked. "To see him so happy after he gave that fist pump; I had tears -- I couldn't help it." "That's my Randall," she said.
Posted by Karl Robinson at Tuesday, December 04, 2012