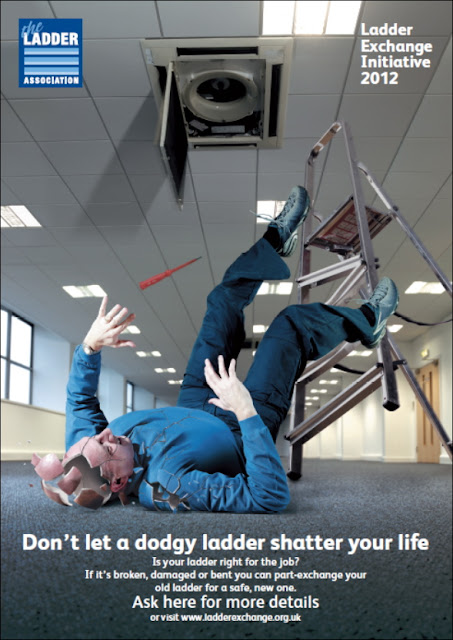 Tragic window cleaner used ‘unsafe’ ladders: An elderly window cleaner fell to his death in South Tyneside while using “unsafe” ladders. Robert Veater, 71, was working at a house in Hindmarch Drive, West Boldon, on November 8 when he slipped and fell. An inquest was told that Mr Veater suffered extensive brain and other injuries in the 12ft fall. After hearing evidence about the poor state of the ladders Mr Veater was using at the time, South Tyneside Coroner Terence Carney said: “This was sadly an accident waiting to happen.”

The hearing was told the metal ladders were hand-made in places and were not fitted with rubber feet. Mr Veater fell off the ladder while cleaning windows at the home of couple Glen Cattanach and Joanne Rowland, who came to his aid after hearing a loud crash. The couple were commended by the coroner for their actions, including putting the injured man in the recovery position and trying to clear his airway.

Pathologist Dr Nigel Cooper said death was the result of a blunt head injury, after Mr Veater slipped from the ladders and fell on to a sloping driveway. Mr Veater, of Durham Road, Sunderland, was initially taken to Newcastle’s Royal Victoria Infirmary but, after he suffered respiratory arrest, the ambulance was diverted to South Tyneside District Hospital, where he was pronounced dead.

Det Insp Caroline Ord, who investigated the fatal fall, said: “Mr Veater worked alone and usually anchored his ladders to a vehicle, but the ladders did not stay that way. “The two-piece ladder was not the safest and not in the best of repair. “In my opinion, the ladders slipped.” Mr Carney said: “Mr Veater died as the result of a blunt head injury and that blunt head injury occurred inadvertently in a fall.” Verdict: accidental death.

Trade in your old or dodgy ladders and get a brand new shiny safe ladder in return! The Ladder Exchange is a great example of how everyone in the health and safety system can share responsibility and work together towards a common goal; namely, reducing falls from height.

10,000 Ladders and Rising !!! With immediate effect, the Ladder Association has assumed responsibility for delivering the annual Ladder Exchange. Since its launch, the initiative has been responsible for removing over 10,000 broken, bent or damaged ladders from the workplace with the message 'Don't let a dodgy ladder shatter your life'. Now in its sixth consecutive year, the Ladder Exchange, which begins on 1 September and runs until 30 November 2012, provides all businesses with the opportunity to exchange broken, bent or damaged ladders for safe, new ones at a discounted price.

Actively supported by the Ladder Association and its members who, throughout, have made a firm commitment to work in partnership with HSE and the access industry, the Exchange has also contributed to raising awareness and understanding of how to use ladders and stepladders safely. Under the scheme, suspect ladders can be exchanged, at a discount, at participating partners. The Ladder Exchange is a great example of how everyone in the health and safety system can share responsibility and work together towards a common goal; namely, reducing falls from height.

Falls from height: Despite a steady decline, falls from height remain the most common kind of workplace fatality. In 2010/11, a total of 38 workers died and 4,327 employees suffered a major injury as a result of a fall from height in the workplace, with a further 10,232 employees suffering an ‘over 3 day’ injury. Many of these incidents could have been avoided by people with the right training using the correct equipment that had been properly inspected and maintained.
*Please contact the ladder association for more information even though the time-line has passed.

Why is FFI being introduced? HSE and the government believe it is right that businesses that break health and safety laws should pay for HSE’s time in putting matters right, investigating and taking enforcement action. Before FFI was introduced, this was paid for from the public purse. FFI will also encourage businesses to comply in the first place or put matters right quickly when they don’t. It will also discourage businesses who think that they can undercut their competitors by not complying with the law and putting people at risk.

Will FFI apply to me? If you comply with the law you won’t pay a fee.
FFI only applies to work carried out by HSE’s inspectors so if your business is inspected for health and safety by another regulator, such as local authority environmental health officers, it will not apply. FFI will apply to all businesses and organisations inspected by HSE, except for:
Posted by Karl Robinson at Monday, December 17, 2012