Biggest Idiot On A Ladder Winner 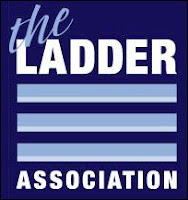 Biggest idiot on a ladder crowned by Ladder Association after public vote: After three months of picture submissions and voting, the Ladder Association’s Idiots on Ladders campaign has discovered the biggest “ladder idiot” in the UK. Beginning on September 1st, the Ladder Association welcomed submissions from the public of the worst uses of ladders they could find. The competition, which aimed to shame dangerous ladder users into changing their ways, then offered people the chance to vote on Facebook to decide which picture was the worst.

The clear winner, with over 30% of the vote, showed a worker reaching up to the top of a chimney with a gaping fall directly below him. Not only could the fall have killed him, but one commenter pointed out that his ladder still did not reach high enough to keep him from stretching upwards. To top the situation off, he also had a bucket wedged between the ladder and the wall it was resting against. The Ladder Association is now looking into the background of the picture in an attempt to identify the man and offer him the training he obviously needs, assuming he has survived to benefit from it. 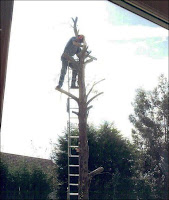 In second place came a picture taken earlier this year, showing a gardener with one foot on the rung of his ladder and the other on a tree branch, while he brandished a chainsaw at the tree’s other branches without protective clothing or a harness. The picture originally came from a news story in the Lincolnshire Echo, which reported that he was fined a total of £6,000 for his ladder idiocy. The photo only won around 14% of the vote but took off on Facebook as it was shared and commented on by even more people than the winner.

Cameron Clow, Chairman of the Ladder Association, said: “This competition was all about raising awareness and as such it was run alongside the Ladder Exchange, which offers people and businesses the chance to trade in unsafe ladders for new, compliant ones. We wanted to show together two of the biggest dangers in the workplace – people using their ladders in an unsafe way, and people using equipment that is unfit for purpose.

“Ladders are arguably the most common type of equipment used for work at height – it is estimated that three million are in use in the UK alone. Reported ladder accidents have fallen by over 30% over the last 10 years, but more clearly needs to be done. We are pleased at the response the competition received, with people making sure to pull out their cameras whenever they saw dangerous ladder use, but it is also a worrying sign of how common this kind of unsafe activity is.”

38 pictures were submitted throughout the contest from around the globe, with one picture of a ladder perched precariously on an unsafe mobile access tower being traced back to Mexico. While it is already known that falls from height are the number one cause of death at work, the number and variety of the pictures are startling evidence that dangerous ladder use is occurring daily. With the competition now over, the completed Idiots on Ladders album can be found on the Ladder Association Facebook page here.

Some of the window cleaning entrants of "biggest idiot on a ladder"... 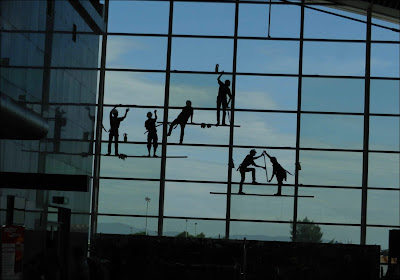 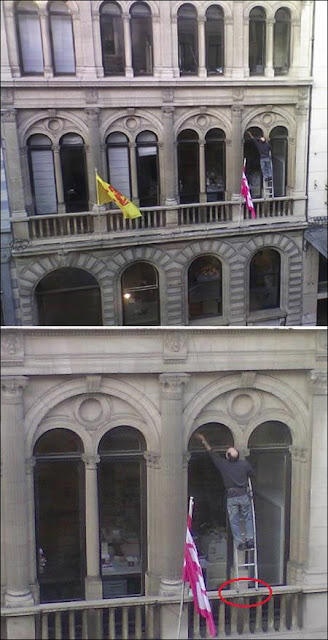 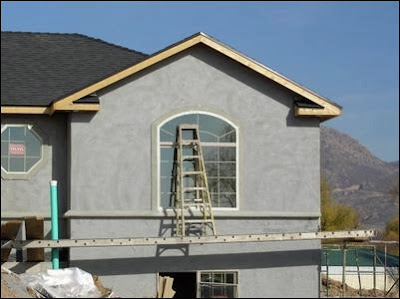 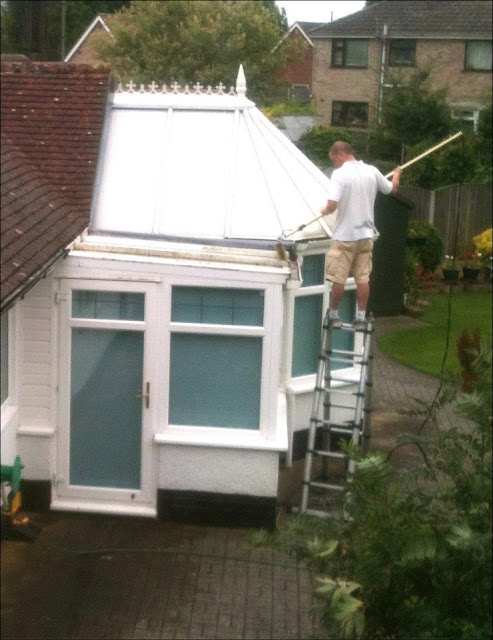 Clickable links...
Ladder Falls: Even The Most Experienced Can Fall
Window Cleaners Star In: Ladders, Tables & Death Wishes
Is Cleaning a Window Worth Your Life?
Protect Your Brain - More Ladder Falls
DeathWish: HomeOwners Clean Their Own Windows