Irish Linen - The Cloth of Kings: Did you know that linen is the oldest fabric known to man and even pre-dates the invention of the wheel? But, while it was prehistoric man who created the first-ever fabric from the fibres of the flax plant, it was probably the Egyptians who, in recognizing it as a noble fabric, pioneered the industrial production of what was to become the cloth of kings. Three thousand years before Christ was born, linen was the favored fabric of the Pharaohs and the Egyptian aristocracy in both life and death. Indeed, mass production of linen was essential because it would have taken approximately 1000 yards of linen to wrap around an Egyptian king, as part of the mummifying process. It was to be several thousand years before linen made its way to Ireland. It is thought to have arrived in early Christian times and it is said that St. Patrick is buried in a shroud of Irish Linen.
While historical records show that linen was being made in Ireland through the Middle Ages, it was not until the early 17th Century that the Irish Linen industry began to develop in any structured way. Production was concentrated in the north of the country, particularly in the area of land between the two great rivers of the north, the Bann and the Lagan. To this day, the area is known as The Linen Homelands. But what is it that sets Irish Linen apart? Why is it the preferred fabric of The White House, The Sultan of Brunei, Queen Elizabeth II, the Imperial Court of Japan and the Vatican? 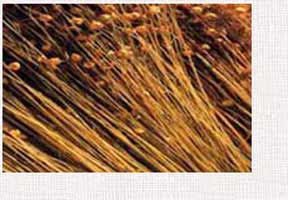 There are other reasons that Irish Linen has become the world's favorite. The linen manufacturing process is complicated and requires great skill at each stage of production. Linen is a natural fabric produced from fibres of the flax plant (pictured left). The plant is sown in April, produces delicate blue flowers in June (pictured right) and is harvested in August. After pulling, the crop is laid out in the fields to ret, a process where the

woody bark of the plant is naturally rotted so that the fibres come loose from the main stem. The seeds are removed and used for linseed oil or cattle cake and the bark is removed by a process called scutching. It is used for chipboard. No part of the flax plant is wasted.
Flax fibers are amongst the oldest fiber crops in the world. The use of flax for the production of linen goes back 5000 years. Pictures on tombs and temple walls at Thebes depict flowering flax plants. The use of flax fibre in the manufacturing of cloth in northern Europe dates back to Neolithic times. Fiber crops are field crops grown for their fibers, which are used to make paper, cloth, or rope. Flax fibre is extracted from the bast or skin of the stem of flax plant. Flax fibre is soft, lustrous and flexible. It is stronger than cotton fibre but less elastic. The best grades are used for linen fabrics such as damasks, lace and sheeting. Coarser grades are used for the manufacturing of twine and rope. Flax fibre is also a raw material for the high-quality paper industry for the use of printed banknotes and rolling paper for cigarettes. Flax mills for spinning flaxen yarn were invented by John Kendrew and Thomas Porthouse of Darlington in 1787.

Flax seeds come in two basic varieties, brown and yellow or golden, with most types having similar nutritional values and equal amounts of short-chain omega-3 fatty acids. The exception is a type of yellow flax called Linola or solin, which has a completely different oil profile and is very low in omega-3. Although brown flax can be consumed as readily as yellow, and has been for thousands of years, it is better known as an ingredient in paints, fibre and cattle feed. Flax seeds produce a vegetable oil known as flaxseed or linseed oil; it is one of the oldest commercial oils and solvent-processed flax seed oil has been used for centuries as a drying oil in painting and varnishing.
Posted by Karl Robinson at Friday, November 28, 2008