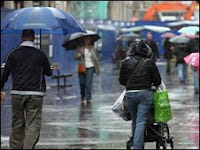 Rain brings flash floods warning: Flash floods have begun to hit south Wales with more warned for the south-west, south, and south-east parts of England as heavy rain continues. There are six flood warnings in the South West and Wales, while 27 "flood watch" areas are being monitored, including nine in the Thames Valley.
So to all those UK window cleaners out there, who are sick of the weather, I've tried to brighten your day with some old "intro" video's that really should be watched on a cold, wet, windy, miserable summer. First up, classic Norman Wisdom in his heyday: -

Another oldie, this time for the American viewers & making a big comeback on Broadway for the last few years: "How to Succeed in Business Without Really Trying" is as fast, funny and glitzy as it ever was - apparently! Nearly 34 years after its premiere at the 46th Street Theatre "How to Succeed" isn't about the corporate raiders, the arbitragers and the creative bookkeepers who so captivated the 1980's. Its world is enclosed entirely within the glass-and-steel tower that is the World Wide Wicket Company headquarters in Manhattan. And at its center is the most endearingly flawed character ever to scheme his way from window-washer to the top of the corporate ladder.
Posted by Karl Robinson at Wednesday, July 09, 2008