High drama! Construction workers rescued from scaffold collapse: Three construction workers were rescued from outside the 17th-floor window of an upper East Side building Friday — after their scaffolding suddenly collapsed in the air, sources said. Firefighters raced to backside of the E. 66th St. high-rise near Third Ave. after the three workers were spotted dangling from the scaffolding — which was hanging on a 75-degree angle — about 10:15 a.m., officials said. Officers from the NYPD’s Emergency Services Unit also arrived at the scene and one of the cops flipped over the roof and rappelled down the wall to get to assist the stranded workers, police said. Within 10 minutes — and after a crew of firefighters secured the scaffolding on the roof — the emergency workers pulled all three men to safety through nearby windows, Battalion 10 Chief Michael Massucci said.
One of the workers, a 35-year-old man, was taken to New York Presbyterian Hospital, where he was treated for minor injuries. The other two men, ages 45 and 47, were not hurt. Sources said a cable may have slipped from a motor mount on the roof, causing one side of the rig to fall from the 21-story building. Inspectors from the city’s Department of Buildings are trying to determine the exact cause. Massucci, a 22-year veteran of the FDNY, said the men survived because they were all wearing their safety harnesses. The workers were doing brick work on the facade of the building.

Scaffolding rescue in Manhattan: Emergency crews responded to the scene of a scaffolding accident at E. 65th St. and Third Ave. in Manhattan. Three people were rescued from the scaffolding, which apparently broke loose at approximately 10 stories up, said FDNY officials. One person was taken to New York Presbyterian Hospital and two others refused treatment. The people rescued were reportedly washing windows when a rope attached to the scaffolding snapped. Video from the scene showed one person safely moved by emergency personnel off the scaffolding and through a window. The scaffolding was hanging at a 45 degree angle from the side of the building. SkyFoxHD was over the scene at about 11 a.m. where FDNY, NYPD and other emergency personnel could be seen on the ground and on the roof of the building. Crews appeared to be attempting to move the scaffolding to the roof.

Window cleaners left hanging off building as scaffold snaps: In dramatic scenes in New York, three window cleaners dangling from scaffolding high above a Manhattan street have been pulled to safety by police and firefighters. The men were working on 17th floor windows when one side of the scaffolding slipped dropping that end of scaffolding two floors down. While police were lowered to reach the men, firefighters forced their way into an apartment, and after removing two windows, helped pull the officer and the workers to safety. One of the workers was taken to hospital for treatment of minor injuries. 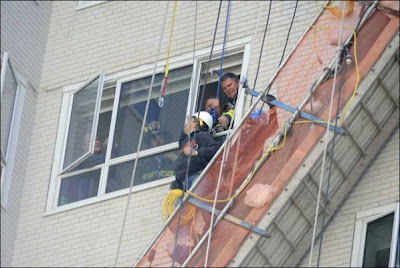 Three construction workers were rescued from a scaffolding collapse on the 65th Street side of Manhattan House between Second and Third avenues earlier today, the New York Daily News reported. Two of the men had no reported injuries and the third was taken to New York Presbyterian Hospital for minor injuries. The three men were seen dangling from the scaffolding at 10:15 this morning. The scaffolding was outside a 17th floor window and hanging at a 75-degree angle, according to the News. Emergency workers pulled the men to safety through nearby windows. The city’s Department of Buildings issued a partial stop work order at Manhattan House, at 200 East 66th Street, today, according to the agency’s website. Sources told the Daily News that a cable slip from the rooftop motor mount may be the culprit, though the cause is still under investigation. Fox reported the men were washing windows, while the News said the men were doing brick work on the building’s facade.
Posted by Karl Robinson at Saturday, April 14, 2012