The Sad Side Of Window Cleaning - Singapore

Indonesian Maids Continue to Fall to Deaths in Singapore: When a maid plunged 30 storeys to her death on Thursday, she became at least the third Indonesian domestic worker to die this way since the start of the year. The three women had something else in common — they are all believed to have slipped while cleaning their employers’ windows or putting out laundry.

Since as far back as 1989, there have been cases of maids falling in similar circumstances, sometimes while perching on ledges, stools or window sills. And with employers saddled with much of the blame for the deaths, the onus is on them to make sure that their domestic helpers stay safe, Members of Parliament and maid agents told The Straits Times. 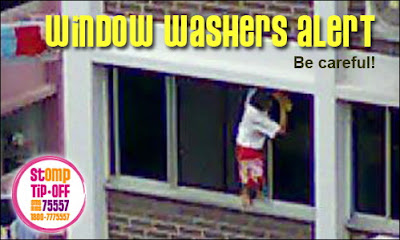 They said that families need to show more understanding toward their maids, who may not be accustomed to urban life. Many come from rural areas and “do not have the mindset of high-rise living,” said Tampines GRC MP Baey Yam Keng. The 23-year-old woman who died last Thursday is believed to have slipped while cleaning windows at Telok Blangah Heights.

Tanjong Pagar GRC MP Dr Chia Shi-Lu said some employers could be unaware of dangers in the home. “They don’t think of their house as a workplace,” he said. “But actually, there are a lot of dangers.” The orthopedic surgeon said he sees many patients who have suffered falls at home. Other risks include electrical plugs, he said. “The home has hazards ... our emphasis on workplace safety can also be applied at home,” he added. 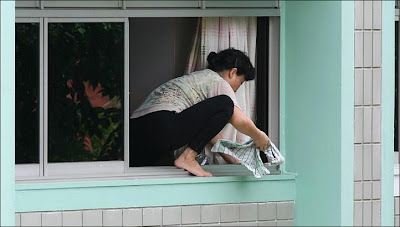 While new maids have to undergo training by the Ministry of Manpower (MOM), employers need to check that they have understood the instructions, said a spokesman for the Bluesky Employment Agency. Marine Parade GRC MP Dr Fatimah Lateef said families need to have reasonable expectations about what their domestic helpers can do.

The trend of installing fancy fixtures such as bay windows and doing away with window grilles could also be causing the high number of falls, said Dr Ho Nyok Yong, president of the Singapore Contractors’ Association. He added that there is no foolproof way to prevent someone falling.

Advertisements that tug at the heartstrings might be one way to prevent such deaths, said Jeremy Khoo, executive director of the Archdiocesan Commission for the Pastoral Care of Migrants and Itinerant People. He gave the example of the successful campaign to raise awareness of dengue fever. Jolovan Wham, executive director of the Humanitarian Organization for Migration Economics (Home), called for stricter rules and regulations. This means including domestic workers in the Work Injury Compensation Act so they receive payouts in the event of death or injury, he said.

Cleaning windows in high-rise buildings should also not form part of maids’ duties, he added. ‘It is not worth risking someone’s life over some dirt.’ But others say the responsibility cannot rest only on the shoulders of employers. Developer Ritchie Chua, who has a domestic helper, said: “Even if the employers warn the maids, they might not understand because they are not educated.”

The 43-year-old said he provides safety belts for workers on his construction sites — but they often remove them later, complaining that they are “very troublesome.” Maids may have a similar attitude, he said. Today, the MOM is due to hold a media briefing on ensuring the safety of foreign domestic workers.

Cheers, jeers for maid's day off: Singapore's decision to grant foreign maids a weekly day off was welcomed Tuesday by social workers and rights groups, but some employers grumbled and critics said the move falls short of international labour standards. While Singapore is proud of its squeaky-clean image and widely admired for its economic development, it has been regularly criticised for its treatment of foreign workers. Announcing the change, Minister of State for Manpower Minister Tan Chuan Jin said Monday the mandatory weekly rest day would apply to maids whose work permits are issued or renewed from January 1, 2013.

Employers who need the services of their maids on their rest day must compensate them. "The decision by Singapore's Manpower Ministry to grant foreign domestic workers a weekly rest day is an important reform," Human Rights Watch said in a statement. But the New York-based watchdog said the move, which came after after years of lobbying by welfare groups, still falls short of international standards as it will take effect only in 2013 and does not offer other forms of labour protection.

More than 200 000 women from impoverished villages in Indonesia, the Philippines, Sri Lanka and India work as maids in Singapore. Some maids never get a single day off during their first two-year contract. "The lack of adequate protection has made live-in domestic work a highly stressful occupation and many women in such situations find it difficult to cope with the social isolation and demands of the job," said social worker Bridget Tan. "As a result, many of them suffer from anxiety, depression and loneliness," Tan, founder and president of the private group Humanitarian Organisation for Migration Economics, said in a statement.

Tan cited the case of a 19-year-old Indonesian helper who was recently jailed for killing an elderly Singaporean widow because the maid was unable to cope with her employer's demands and constant scolding. Nisha Varia, senior women's rights researcher at Human Rights Watch, said a day off "is critical for a domestic worker's physical, mental, and emotional well-being". "But this important reform should go into effect this year and apply to all domestic workers and their current contracts," Varia added.

But one Singaporean employer, banker Jacqueline Ng, expressed concern that some maids could abuse their freedom. Ng said she had to send an Indonesian maid home recently after the helper was found to have contracted venereal disease. She said her maid, who did not even enjoy a regular day off, had refused to say how she got the disease. "Can you imagine if she has a day off. What will happen?" Ng asked. "It's not that we are inhumane, but they will be very difficult to control. What I am saying is with this mandatory day off, as an employer I don't feel secure because we have no control (over) who they mingle with."

Foreign maids play a crucial social and economic role in Singapore, where most couples have to work to cope with the high cost of living and the elderly population is rising fast. A businesswoman, Poon Boon Eng, told the Straits Times newspaper that the new rule "is really bad news for women who are working". "I need to rest on Sundays too," she said, adding that she would rather compensate her helper for a foregone rest day. Human Rights Watch said Singapore's labour-protection rules lag behind those of other places with a lot of migrant workers such as Hong Kong, where maids already enjoy a day off every week.

MOM to review maid safety-training course: Employers of foreign maids may soon expect to receive a report on how their domestic helper performed in a mandatory safety course. That is one of several changes being explored in a review of safety training for foreign domestic workers who arrive here for the first time, the Ministry of Manpower (MOM) said yesterday. Employers currently receive only a certificate as proof that their maid has attended and passed the safety course. But should the change be implemented, details of the maid's performance during the course, such as her strengths and weaknesses, will be given to her employer, too.
During the four-hour course, which the ministry started in 2004, maids are taught safety procedures when carrying out household chores. For example, they learn that when hanging out laundry in high-rise buildings, they should avoid overloading the bamboo poles, and avoid leaning out of the window. They are also taught to use extendable cleaning equipment when cleaning ceiling lights and windows, to minimise the risk of falling.
MOM said it is timely to review safety awareness - six maids fell to their deaths while cleaning windows in the first three months of the year. For the whole of last year, there were only four such fatalities and, in 2010, there were eight cases. MOM said that in the last five years, it had prosecuted nine employers for failing to ensure their maids' safety. Said Filipina Zenaidah Lopez, 41, who has been working here for the past seven years: "It will be safer for us, because employers will know what we can do or cannot do."
While maid agencies contacted welcomed the proposed change, some said it could affect employer- maid relations. Said Nation Employment director Gary Chin: "If the maid gets a low test score, employers will have the perception that she cannot perform well." Dr Noorashikin Abdul Rahman, vice-president of the foreign-worker advocacy group, Transient Workers Count Too, said the report would give the employer a better understanding on their maid. But it could also be used to end her contract. More details on the measures to fine-tune the safety course are expected by the middle of the year.
Posted by Karl Robinson at Tuesday, April 03, 2012

Reply to Riverside window cleaners:
They're not things. They are fellow people.