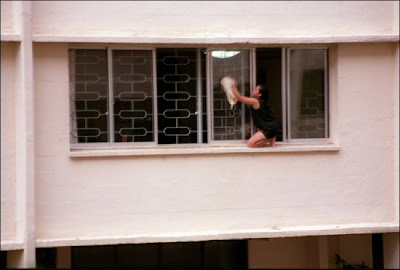 3 Indonesian maids seek refuge at embassy in Singapore: Three Indonesian maids have sought refuge at their embassy after their employers put their lives at risk by forcing them to clean windows and hang out laundry, they claimed. The Ministry of Manpower (MOM) said that it is now looking into the claims of one of the maids, Yuli Primariyanti, 24. She claimed that her employer made her stand on window sills to clean the exterior window panes of a two-storey bungalow in the east.

Indonesian Embassy Counsellor Sukmo Yuwono said the other two maids declined to submit formal complaints to MOM. Instead, they decided to end their contracts and return to Indonesia. This year, eight Indonesian maids have died after falling while cleaning windows, hanging out laundry, or hanging up curtains in high-rise flats.

Following the spate of deaths, Sukmo urged maids to contact him if they were being made to clean windows and hang out laundry in dangerous ways. The three maids said they ran away as they were each afraid of becoming another casualty. Yuli said she went to her agency on May 3 but was told to return to her employer's home. Unwilling to do so, she went to the embassy the next day.

She had been working for her employer, a housewife, for about two weeks. It was her first time working in Singapore, she said, adding that she is from a village in East Java where there are few high-rise buildings. She said: "I told my employer I was scared to stand on the window sills to clean the windows on the second storey of the house. But she told me I had to do it or she would send me back to Indonesia."

She added that she was made to work for more than 14 hours every day. She has decided to return to Indonesia once investigations into her complaint are completed. Yuli's employer, who is in her 50s and declined to be named, denied her allegations. "She also did not tell me she was unhappy, and just ran away," she said.

An MOM spokesman said it is currently establishing the facts of Yuli's case, adding: "Once a case has been established, investigations can then commence. At this point, it is premature to come to any conclusions." Sukmo said he has not decided what to do about Yuli's employer. He had said previously that employers or agents found to have endangered the lives of Indonesian maids would be blacklisted and barred from hiring them.

The other two maids also claimed they had raised concerns about safety to their employers but were ignored. They went to the embassy on May 2.  Sunarti Warkin, 30, said she was told to stand on a stool and stretch out of the window to clean the exterior window panes of a 15th-floor flat in Bukit Merah every day. Anni Puji Rahayu, 28, said she struggled to balance heavy laundry on long bamboo poles outside her employer's fourth-floor flat in Tampines. Sukmo said he expects more maids to approach the embassy for help.

Maid agents said maids usually run away for a combination of reasons, and it is unlikely that safety concerns were the only reason that compelled them to seek refuge at the embassy. They said it was important that MOM ascertains if these are genuine cases of a maid's life being endangered. Best Home Employment director Tay Khoon Beng said: "The maid must be feeling quite desperate to want to run away to the embassy. But this should be the last resort. They should try to speak to their agent and employer and work things out or get a transfer." There are about 103,000 Indonesian maids in Singapore.

Singapore to Ban Risky Chores for Indonesian Maids: Ban foreign domestic workers in Singapore from dangerous practices such as the cleaning of exterior window panes - that was the rallying cry of about 1,000 such workers who gathered yesterday at Kallang Theatre to celebrate Mother's Day. The event - organized for the first time by the Humanitarian Organization for Migration Economics (Home), a non-government group - featured performances by the workers, who also shared stories of their employment here.

The festivities were mixed with calls by both activists and the workers to improve safety standards for the migrant community here. Eight Indonesian foreign domestic workers have died this year while cleaning windows, hanging out laundry or hanging up curtains in high-rise flats. Between 2007 and last year, 69 workers here fell from such flats, and 24 of them died. "These women came here to make a living, and they're returning home in coffins because of window-cleaning. It's outrageous," said Bridget Tan, the president of Home.

The group plans to collect 1,000 signed petitions to ban the practice here and submit them to Minister of State for Manpower Tan Chuan-Jin. Home will also reach out to the embassies of countries such as the Philippines and Myanmar, which send large numbers of workers here, to persuade them to enact tougher protection laws.

Minister of State for Community Development, Youth and Sports Halimah Yacob, who was the guest of honor at yesterday's event, said the government has introduced measures to improve workers' welfare, such as a mandatory weekly rest day, to take effect from next year. She noted in her speech that domestic workers continue to be among the most vulnerable groups of workers: "Unlike other workers, (they) can feel isolated as they work in individual homes." "They need support and encouragement, especially when they first arrive here, and are beginning to adapt to the new environment and their employers' expectations," she said.

$5,000 fine for not ensuring safety of maid who fell to death: SINGAPORE - Madam Gan Hui Leung, 46, has become the first to be convicted this year for failing to ensure the safety of her foreign domestic worker (FDW) who fell from height in Nov 2011 and subsequently died from her injuries. Gan was fined a maximum of $5,000. This is the first case involving a conviction of a maid employer for safety lapses in 2012. The Indonesian maid, Siti Ustima, 25, was employed by Gan from April 20, 2010 to November 11, 2011.

On the afternoon of November 11, 2011, Siti was cleaning the living room windows of Gan's fifth storey flat in Clementi. Shortly after, there was a loud noise and she was found lying on the ground floor. Siti died from multiple injuries. A wooden chair, a red plastic pail and a cleaning spray were later found next to the living room windows of the flat. Investigations revealed that during the employment of Siti Ustima, Gan did not demonstrate or give specific instructions to the FDW on how the windows should be cleaned.

The employer assumed that Siti, who was transferred from another employer, would know how to do so. She had allowed Siti to stand on a stool with the windows and the grilles wide open when cleaning the bedroom and living room windows. She did not stop her from doing so, nor did she ask her to come down from the stool. Gan also did not provide her maid with an extendable window wiper to clean hard-to-reach areas of the windows. Gan was found guilty of violating the Work Permit Conditions for the employment of foreign domestic workers, which is an offence under section 22(1)(a) of the Employment of Foreign Manpower Act.
Posted by Karl Robinson at Monday, May 14, 2012

Thats crazy that many maids have died doing this. The craziest thing is they had to seak refuge at the embassy.

I couldn't imagine being in that situation.