Window Cleaning Gadget Sales Rise After Spate of Indonesian Maid Deaths in Singapore: A popular magnetic window cleaner by local home appliance brand Maier is selling well at DIY shops after the spate of maids falling to their death while cleaning windows. The Maier Innovative Window Cleaner, which was first made available here in 2002, allows its user to clean the exterior of windows without having to open them wide and lean out precariously, as is often the case in high-rise buildings.

Its secret lies in the use of magnets in two rectangular cleaning devices. When you move one on the inside of the window, the one on the outside follows due to the magnetic attraction. In the process, the devices pick up dirt and dust on the cleaning mats and squeegees at their bases. About 100 to 200 units are sold monthly, says Maier, which supplies them to about 20 shops including do-it-yourself chain stores Home-Fix and Selffix. The product sells for $29.90. 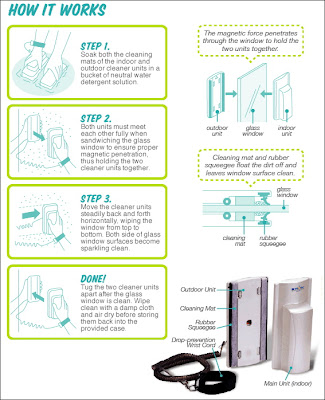 Maier sales manager Peter Chan has seen an increase in sales of “about 15 to 20 percent” in recent months, each time there is a case of a maid falling from a high-rise building. Eight maids have fallen to their deaths this year, most of whom were apparently cleaning windows when they fell. Between 2007 and last year, 24 maids fell to their deaths. “In previous years, whenever there is newspaper report about a maid falling while cleaning, there will be more awareness and interest about safety in window cleaning,” Chan says. “Only this year, the increase in sales is much higher because on average, there are two cases involving maids a month. Previously, the increase was only marginal.”

Home-Fix sells an average of 60 units a month, while Selffix sold 15 last month. Two out of Selffix’s 10 outlets are sold out of the product and three are running low on stocks. However, some customers have found it unsatisfactory. Elise Teo, 54, shelved it after using it twice three years ago. “It is not very smooth-moving on the window, and it is also not very efficient in cleaning,” says the assistant vice-president in global transactions at DBS. 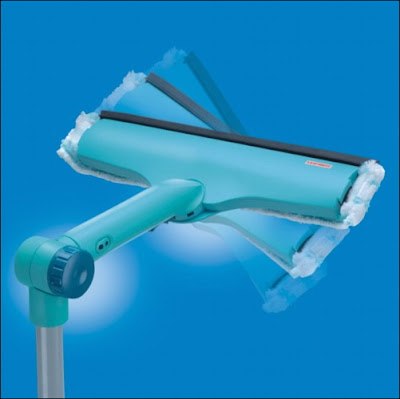 There are alternative gadgets around, including extendable window cleaners such as the 3-in-1 Window Wiper by German home appliance brand Leifheit. The cleaner works like a mop, with an extendable pole and bendable and detachable cleaning head. However, at $98, it is not as popular as the cheaper Maier one. DIY shop Handyhouse sells “not more than 10” Leifheit cleaners a month, while Zener DIY Store sells “about one” each month. LifeStyle asked Filipina maid Florabel Gepulango, 34, to put the Maier Innovative Window Cleaner and the Leifheit 3-in-1 Window Wiper to the test.

Imposing rules against household chores not the way to go (SINGAPORE) - The Association of Employment Agencies in Singapore said today that source countries of foreign domestic workers should focus on training instead of imposing rules against doing certain household chores. The comments come after the Indonesian government imposed new laws preventing its domestic workers from cleaning window exteriors and hanging out laundry in high-rise homes. The new rule comes into effect this month. Previously, they were only applicable to Indonesian domestic workers renewing their contracts. The contractual ban on cleaning window exteriors and hanging out laundry comes as eight Indonesian foreign domestic workers have fallen to their deaths in the last five months.

While the Philippines Embassy and Sri Lankan High Commission could not be reached for comment, stakeholders said it is unlikely that other jurisdictions will implement a similar rule. At present, fatal falls while cleaning windows and hanging out laundry seem to be restricted mainly to Indonesian domestic workers. "We have not really heard about Filipino domestic workers, or Indian, or Sri Lankans, or even Myanmar domestic workers, having fallen off in this manner," Ms K Jeyaprema, president of the Association of Employment Agencies, said. "The (Indonesian) ambassador confirmed that it looked like it's only happening to his nationalities, and so it's a big concern for him."

Instead of imposing clauses in contracts, the Association of Employment Agencies said the focus should be on safety training in source countries. Ms Jeyaprema says this could entail using some of the 400 hours of mandatory training at source training centres, to focus on getting domestic workers used to their living and working environments. Most of the time, foreign domestic workers who come from villages are not used to working in high-rise environments. "A lot of it has to do with the foreign domestic worker herself, how conscious she is of her own safety," Ms Jeyaprema said.

"Really, we have to focus on educating the foreign domestic worker herself. I think Singaporean employers are responsible people - I wouldn't see them really risking a foreign domestic worker's life over a chore like cleaning windows or hanging clothes."She added that the association will give input to Indonesian authorities on its training programmes.
Posted by Karl Robinson at Monday, May 07, 2012