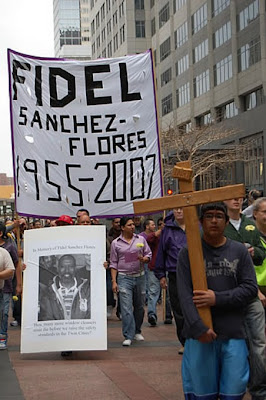 MINNEAPOLIS - With flowers and prayers, window cleaners and supporters remembered a co-worker and father who died doing his job in downtown Minneapolis. Member of Service Employees International Union Local 26 held a memorial march Friday to commemorate the life of Fidel Sanchez-Flores, killed when he fell while working at the IDS Center in downtown Minneapolis in 2007. He was one of three window cleaners to die on the job in the past three years. The march occurred as some 60 window cleaners remain locked out of their jobs by cleaning companies in the Twin Cities. Local 26, which is in contract talks with the contractors, said the workers were locked out because they have been raising safety concerns. 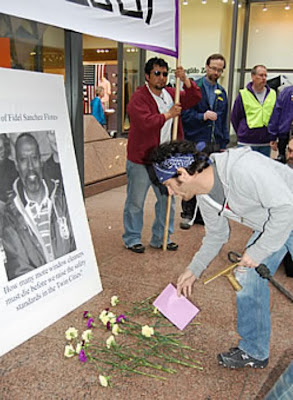 The marchers stopped in front of two buildings they said are very dangerous to clean – the Oracle building at 9th St. and 2nd Ave., and the U.S. Bancorp building on Nicollet Mall. The workers said many buildings fail to have adequate places for workers to tie on safety equipment.
After a moment of silence in front of the IDS, Vielka Sanchez – Fidel Sanchez-Flores’ daughter – told marchers that their cause is just. “Where my dad’s at right now – he’s so thankful you guys are doing this,” she said. “He’s 100 percent behind you.” Window cleaners carried purple and yellow flowers that they laid in front of a large portrait of Sanchez-Flores. Rain began to fall as some wiped away tears. James Miller, a window cleaner for 12 years, said he and his co-workers want to prevent further injuries and deaths on the job. While their union supports them in their effort to make their work safer, window cleaners without representation have no such support, he said. Many get hired and start cleaning high-rise buildings without any training, Miller said. Not enough laws are in place to protect these workers, he said. “You have to have a license to cut hair, but not to hang off a building,” Miller noted.
Three window cleaners arrested as protest highlights safety concerns: As an employer lockout of window cleaners entered a second week, three of the locked-out workers risked arrest Monday in a protest to call attention to safety concerns. Shrill whistles disturbed lunchtime in the food court at Gavidae Common in downtown Minneapolis as members and supporters of Service Employees International Union Local 26 took dramatic action to highlight the window cleaners’ calls for improved workplace safety. The group of about 25 people blew whistles and chanted, “How many deaths does it take for window cleaners to be safe?” They unfurled two banners, one reading “window cleaner safety now” and the other memorializing Fidel Sanchez-Flores, a window cleaner who fell to his death two years ago. 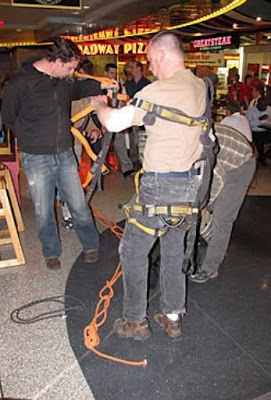 Three window cleaners put on their work harnesses and sat down in an act of civil disobedience to risk arrest. The group’s chanting and whistles continued for several minutes while Dino Crandall, Travis Schneider, and James Miller waited for security guards and police to take action. Crandall and Miller are window cleaners working for Building Maintenance / Final Touch while Schneider is a window cleaner who works for Columbia. Marsden and Columbia locked out workers March 29 after workers raised safety concerns during contract negotiations. “It’s a dangerous job,” Crandall said in an interview last week. “When we finally asked for the inspection reports, they said ‘go home if you don’t want to work.’” “All right gentlemen, it’s over,” a security guard told Crandall, Schneider, and Miller as Minneapolis police moved to arrest the three and handcuff them. Outside, about 25 supporters chanted as Crandall, Schneider and Miller were put inside a paddy wagon.

Glenn Roehsner, Minneapolis, who has worked 14 years as a window cleaner for Marsden Building Maintenance / Final Touch, addressed the media gathered at the site: “We’ve had three people die in the past two years… We are being stressed to work unsafe.” Roehsner said Marsden and Columbia locked out workers when the workers raised safety concerns and that the companies have not agreed to further negotiations. As the paddy wagon drove away, the crowd chanted: “What to we want? Safety! When do we want it? Now!” One of the locked-out window cleaners participating in the event said he felt good about the day’s action. Sidronio Montoya, Minneapolis, who has worked for Marsden for about three years, said: “We want to work. We want to be safe.” 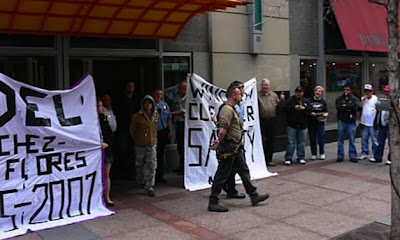 Supporters cheered the three window cleaners for taking a stand as they are led from the building to a police wagon. Also see here & here.
Posted by Karl Robinson at Monday, April 05, 2010