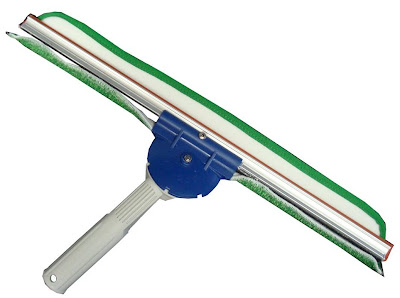 Willie Erkin of Wagtail Pivotal Cleaning Tools sent me an email yesterday with the news that Wagtail Squeegee's are being used on the Burj Khalifa Tower (formerly Burj Dubai) now officially the tallest building in the world. Just watch the video below at 00:45 & see that unmistakable swish of a Wagtail squeegee being used at the highest point anywhere in the world! Freeze it if you have to - you will see the giveaway pivot on the channel as a giveaway. And Giveaway is exactly what we're doing. Just fill in the form below from the trusted & secure email submission form & get a chance to win an 18" & a 14" Wagtail Whirlwind - the newest Wagtail's out there. "

CoxGomyl designed, manufactured and installed all 18 building maintenance units (BMU's) on the Burj Khalifa. Yep, I know I've been going on a little about this incredible buiding! Can't get enough? Go here for the CoxGomyl blog.

But why use a Wagtail over all of the other squeegee's on the market?

The combining of the mop and squeegee can remove the requirement to apply water in a separate action - the single pass of the Wagtail device over the window surface applies water and then immediately squeegees it away, meaning either greater productivity or, more appropriate to the present analysis, less effort for the same productivity. If conditions are such that a separate mopping action is required then that mopping action can be accomplished with much less precision, as a second mopping action will be accomplished by the Wagtail in the same pass as the eventual squeegeeing.
On hot days, sun striking a window can make the window very hot. There is then a tendency for window cleaners to rush the window-cleaning operation because applied water can easily dry before the squeegeeing operation is completed, thus leading to increased drag on the squeegee with the associated requirement to press harder on the tool.
With the Wagtail , additional water is applied by the mop incorporated into the cleaning head which ensures excellent lubrication of the squeegeeing action under all circumstances, thus relieving the stress associated with (a) the need to push harder on a drying surface, and (b) the requirement that the entire operation be hurried. Willie Wagtail shows you how...

So what are you waiting for? If you are a window cleaner just fill in the form below for your chance to win, not one, but two squeegee's, the newest 14" & 18" Wagtail Whirlwinds! The winner will receive an email from me to confirm their postal address. The competition is Worldwide, so don't delay - sign up & be part of more offers to come. You'd be mad not to.

Email Marketing You Can Trust

Yes, I want the chance to win 2 of the fastest squeegee's out there. No thanks, I'd rather take a running jump.
Posted by Karl Robinson at Wednesday, January 06, 2010