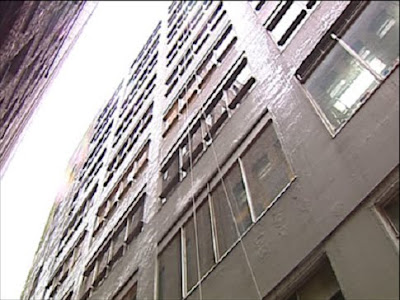 Seattle, WA - A window washer is extremely lucky he's alive after falling eight stories -- and the whole thing was caught on tape! The only thing that saved him was his rope, which caught him just as he hit the ground. It happened Thursday morning in Seattle. Paul Schaefer works at the building next door, where a security camera caught the incredible scene. "It's like, holy cow, this guy hit the ground it looks like and bounced. Fire crews believe 34-year-old Eduardo Lozada stopped just inches short of the ground.
"We heard some yelling," says Robert Kleppen, who witnessed the event. "We looked over at the window. We saw a body come through the 7th floor window and then he fell and continued to fall." Amazingly, after the fall, Lozada was conscious and talking. Witnesses are stunned he survived with his only injury being a broken pinky finger. Looking closely at the video tape, it appears as though Lozada's legs actually hit the ground.
"He was free falling when he actually hit the window and kept going," Kleppen says. "And his ropes were still attached, so safety gear saved him from actually hitting the ground." Emergency crews say Lozada was resilient. He was treated at a hospital and then released. Fire officials haven't said if Thursday's windy weather in Seattle was a factor in the fall.

A window washer fell eight stories outside a downtown Seattle building Thursday morning, but suffered only a broken finger and some bruising and soreness. Eduardo L. Castillo, 34, appeared to be in good shape and was talking as he was being loaded into an ambulance shortly after the 11:20 a.m. fall, said Mike O'Donin, manager of the Broadacre Building at Second Avenue and Pine Street. His most severe injury was a broken finger on his right hand, according to a Harborview Medical Center spokesman. He was expected to be released from the hospital Thursday evening. Castillo, who works for Morris Hansen Enterprises, had been at work about two hours when he fell from outside an eighth-floor window. He was caught by his rope when he reached the second-floor level, and the rope "softened" the impact of his fall into an alley between First and Second avenues.

Castillo, through a hospital spokesman, declined to talk about the fall Thursday afternoon. Craig Castleman, operations manager for Morris Hansen Enterprises, said the window-cleaning work on the Broadacre Building, which houses Nordstrom Rack, was a "fairly straightforward job." Thursday was windy and rainy, but Castleman said it didn't immediately appear that wind was a factor in the fall. "Believe me, these guys are not going to work if it's too windy," Castleman said.
Window cleaning is a top-down affair, with crews starting by tying two ropes to anchors on a building's roof, Castleman said. One rope the cleaner uses to descend, sitting on a small wooden plank that's held up with straps. The other, by means of clips and a lanyard and tension, is supposed to keep the cleaner from dropping more than 2 or 3 feet.

Castleman said Thursday afternoon that company officials were still sorting through the evidence and hadn't yet talked with Castillo. But they theorized that Castillo, who was still strapped into the harness when he landed, could have been holding onto the grip that allows him to descend. Tension on the safety rope must have slowed him down somewhat, Castleman said, so "he didn't just free fall. It was more like a rapid descent. "It's terrifying, nonetheless, for the participant who's doing the falling." If the safety devices hadn't have slowed him down, Castleman said, "he would have more serious injuries if he fell eight stories and was caught up all of a sudden. There would be a lot of pounds of pressure on his body through the harness."

Joseph Eisenschmidt said he arrived in the alleyway just after Castillo's fall and saw "a guy over here with ropes all around him [that were] hanging off of the building." He said he ran into Nordstrom Rack to call for help, then returned to the alleyway. He said when he left the scene, Castillo was still in the harness and paramedics were walking over with a backboard.A handful of Morris Hansen employees at the scene said they were taking the rest of the day off. Castillo had worked at Morris Hansen, one of the larger window-cleaning operations in the area, for about two years, but left a few years ago. He was rehired in mid-October, Castleman said. Thursday morning, he attended one of the company's bi-weekly safety-training meetings — required by government-safety inspectors — where he heard company officials go over fall protection, ladder safety and other issues.

Castleman said he can recall just one other fall at the company since 2002, when he started. That time, the cleaner dropped about 6 feet and didn't hit the ground. Castleman attributed that one to operator error. That cleaner, Castleman recalls, held onto the grip used to descend; when he finally released it, the safety rope caught him. Morris Hansen was cited twice this year for safety violations related to fall prevention. In March, the Washington Department of Labor and Industries (L&I) cited the company for two violations, both of them labeled serious. According to the citation, two workers were cleaning glass-topped awnings on a condo building without safety gear, exposing them to potential falls of 13 to 16 feet. That same day, L&I also cited the company for improper placement of a ladder. In May, the company again received a citation, labeled "repeat serious," for a safety violation. In this case, a worker did not use safety gear, exposing him to a possible 14-foot fall. Penalties totaling $700 were assessed.
Posted by Karl Robinson at Friday, November 20, 2009