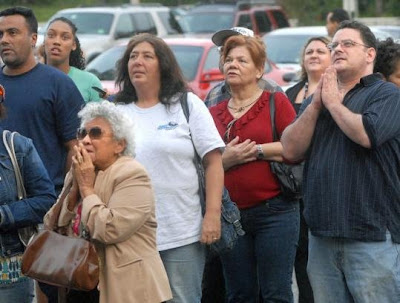 Springfield, Massachusetts - Faith is a powerful force and it's drawing hundreds to one hospital. They've come to see what some are calling a small miracle -- the image of the Virgin Mary peering out from a pane of glass. Spaces usually reserved for hospital parking are now filled with the faithful. Mercy Hospital, a Catholic hospital in Springfield, Massachusetts, is hosting an unplanned religious experience -- an image of the Virgin Mary on an office window. The rainbow image rests on a window of a vacant office. Tuesday, a patient noticed it looked like the Virgin Mary - and the gospel spread like wildfire. "The expression of people faith and belief, is so incredibly beautiful. And I personally find it very humbling," Sister Kathleen Sullivan, of Mercy Hospital, said. "We have people here from all walks of life, all ages, coming here, having a personal expression of faith." There is song, prayer, reflection, reverence. The majority of people here don't believe this is just some anomaly or residue from a window washing. They believe there is a message sent from God. "Peace. There's all kind of races, there's no fighting, no horseplay, They are serious, everyone is talking about the lady," one onlooker said. "I think it's beautiful. I think she is bringing a message to all of us to cool it." Click on the picture below for the video. 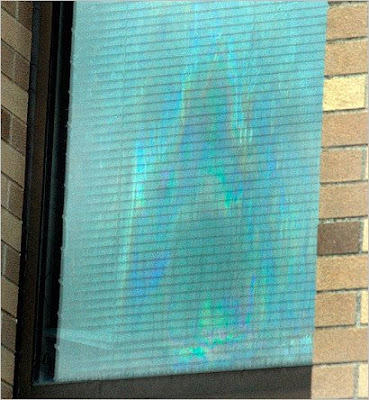 Fulco said the hospital had planned to replace the window, which was originally put in place in the 1970s when the building was constructed. But, "Obviously, we didn't change the window out when we heard. "We figure the best thing to do right now is just leave it in place, until it can be fully evaluated and we can get advice" from the Diocese of Springfield, he said. No one tampered with the glass or painted anything on the inside or outside, Fulco said. Glass specialists have told hospital officials that water seeped between the panes of the double-paned glass and the "minerals reacted and caused some type of acidic reaction that appears to have etched the glass," he said. "What is unusual is the image that appears to have been etched," he said. "Many people have said it resembles the Virgin Mary or Our Lady of Guadalupe."
.
Anna Stofova placed her hands on a window in Perth Amboy, N.J., that attracted hundreds of people in 2000. Below. 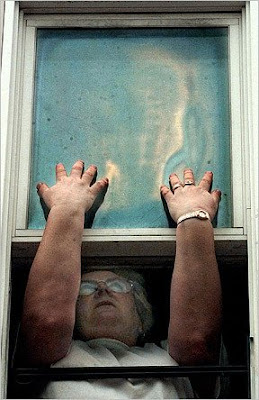 The Springfield window isn't the only one in recent Massachusetts history. At left, a glass pane at the Milton Hospital drew onlookers in 2003. Below. 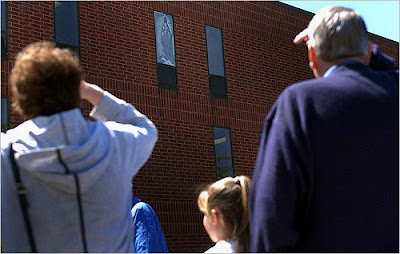 The best yet....This window in Clearwater, Fla., attracted nearly 600,000 visitors before someone defaced it. Below. 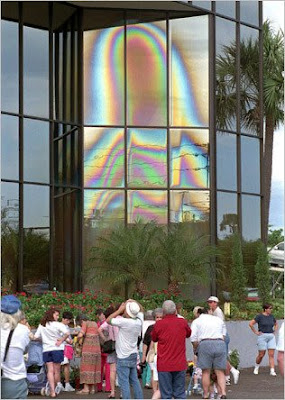