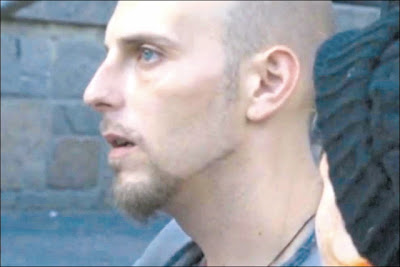 The first San Francisco homicide victim of the year had just moved to the Bay Area hoping for a better life after being portrayed as the villain in a 2010 reality TV show about drug addiction. Joseph Minozzi, 30, who appeared in the tenth season of A&E’s “Intervention,” was found lying near the corner of Sixth and Stevenson streets just south of Market Street about 2:30 a.m. Thursday. He died about an hour later at the hospital, police said. Minozzi grappled with drug addiction. He had recently moved to the Bay Area from Los Angeles and earned a job as a high-rise window washer. “He had a rough life, but he was a very good person,” said Tiffany Johnson, a receptionist at WWC Services Inc., the company that employed him for about two months. “He just wanted to do better and improve his life.”
The area where his body was found is plagued with violence, thefts, gang activity and drug dealing, and it has been targeted by The City for an economic overhaul. San Francisco police said Minozzi had been stabbed in the torso. No arrests have been made in the homicide case and cops are hoping witnesses will come forward with information, police Office Albie Esparza said. Minozzi’s struggles with drugs were displayed nationwide when he appeared on an episode of “Intervention.”

The episode focused on Minozzi’s 21-year-old former girlfriend Rachel Coccio, who lived as a junkie panhandler in New York. Minozzi was portrayed in the show as an abusive boyfriend and drug-addicted criminal who tried to talk Coccio out of entering rehab. After Coccio finally accepted rehab, Minozzi served five months in prison on an assault charge before also checking into a drug facility, according to the show.
Those who knew him in San Francisco described his character as “completely different” from how he appeared on the show, Johnson said. Attempts to reach Coccio before press time Tuesday were not successful. But a late Thursday post on Coccio’s Facebook page paid tribute to Minozzi: “i love you babyboy. always and forever. NO MATTER WHAT.”
Posted by Karl Robinson at Wednesday, January 18, 2012