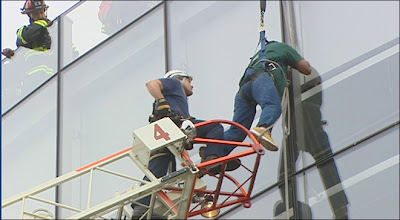 Dangling window washer rescued from top of McCaw Hall: SEATTLE - Firefighters rescued a terrified window washer Thursday after he slipped from his seat and was left dangling 60 feet above the ground at Seattle Center's McCaw Hall. The man was cleaning windows outside the buildings' top floor Thursday just before noon when some kind of malfunction caused him to fall from his seat. 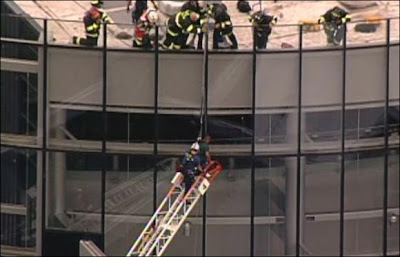 His fall was broken by a safety line after he fell about nine feet, but he was left hanging in mid-air, unable to pull himself back up to the roof. Denise Bolstad of Pacific Northwest Ballet said she was in a meeting inside the building when she heard someone yelling. 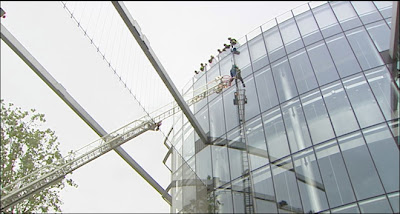 "So I looked out the window, and I didn't see anybody, but the yelling continued, and my meeting continued, and I didn't see anything," she told KOMO News. "Finally I looked up, I tried to figure out what it was outside my window - and that's when I looked up and saw this man hanging there. And I was, 'Oh my God, this man is hanging there.' ... Then we went and called 911, and they were here in one minute or less." 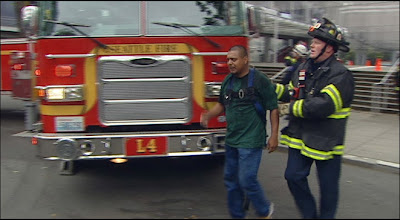 One Seattle Fire Department rescue team deployed to the roof of the building to stabilize the man while a second team extended a ladder to him from a fire truck. The man was able to walk down the ladder safely with the assistance of a firefighter. 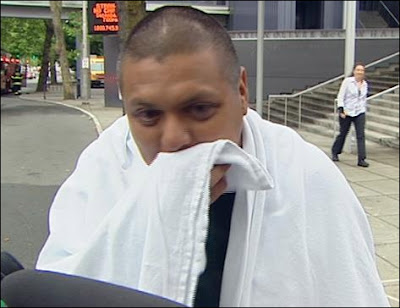 Bolstad says she felt sorry for the man, who had been dangling there for 20 minutes before anyone else was aware of his predicament. "I felt bad for him," she says. "I felt like I needed to go give him a hug when he got down." Julie Jameson, who watched the rescue from the ground level outside the building said she was praying for the window washer the whole time. She praised the fire department for its quick, professional response.

After the rescue, the window washer was shaken up but uninjured. The man, who is fluent in Spanish, told KOMO News that he was afraid he was going to fall to his death at first. And he was grateful for the fire department's quick response. Asked what he told them, he said, "Gracias."

Window washer dangles at Center: 'Happy to be down' - Jose Garcia is an old hand at washing windows, but on Thursday he gained a new appreciation of the potential dangers of his job. Just before noon, as Garcia was washing windows on McCaw Hall, he slid off his seat about 65 feet above the ground at Seattle Center. He spent about 40 minutes dangling from his harness before he was rescued by Seattle firefighters. Garcia, 36, of Burien, was not injured, but he was clearly frazzled by the incident. "I'm OK," said Garcia a few minutes after making it safely to the ground. "I'm just happy to be down."
Garcia, who has worked as a window washer for seven years with SunWest Property Maintenance, an independent contracting company, never had a mishap like this. Garcia was working alone, as he usually does, and had finished cleaning the hall's fifth-floor front windows when a chain securing his seat snapped. "I don't know what happened," he said. According to Kyle Moore, public information officer for the Seattle Fire Department, Garcia then tumbled about eight feet from his seat, but was caught by a backup safety line. Garcia said he didn't have the strength to pull himself up to his seat, so he wrapped his arms and legs around the line, screaming for help. "I was yelling 'Help, help, call 911,' " said Garcia.
Deborah Daoust, director of communications for the Seattle Center, said an employee from the Pacific Northwest Ballet, whose office faces the performance hall, heard Garcia's cries and called 911 at 11:47 a.m. The Fire Department's technical rescue team responded. Firefighters went onto the roof and dropped a rope to keep Garcia, who was about 15 feet below the roofline, from falling further, Moore said. Another firefighter then climbed a ladder and helped Garcia climb down, he said. Garcia was safely on the ground by 12:30 p.m., Moore said. "Everything worked properly," Moore said. "We're glad he's OK."
Posted by Karl Robinson at Friday, July 15, 2011