Search for missing Newport window cleaner widens: More than 1,000 people have now joined the Facebook group to help find Newport missing man John Barrington as his family say they have been “overwhelmed” by the public support. The Argus reported last week how Mr Barrington, 42, of Worcester Crescent, St Julians, was last seen on April 30 when he was due to meet best friend Lawson Richards to go on a day trip to Weston-Super-Mare but didn’t turn up.
With no word from him since, family and friends launched a public campaign to find him including putting up hundreds of posters in the area and setting up a Facebook group named ‘Help find John Barrington, Newport’. The group, which was set up just over a week ago, now has more than 1,000 members who are offering their help and support in the campaign. Mr Barrington’s sister Andrea said friends were also now planning on holding a charity fundraising event this weekend to raise funds for the campaign.
The details are yet to be finalised. She said: “The support we have had in the campaign has been overwhelming and people have been marvellous. We are still hopeful John is somewhere out there.”
Miss Barrington said friends had also been travelling to places like Bristol and Weston-Super-Mare, where Mr Barrington often visited, to put up posters and search for him.
Mr Barrington, a part-time window cleaner, is described as six feet tall and of a slim build with short brown hair. He was last seen wearing blue jeans, a royal blue jacket with white stripes, a blue top and trainers. He has a tattoo of Batman on his upper right arm and one of Mickey Mouse on his upper left arm. Anyone with any information is asked to call Gwent Police on 01633 838111. 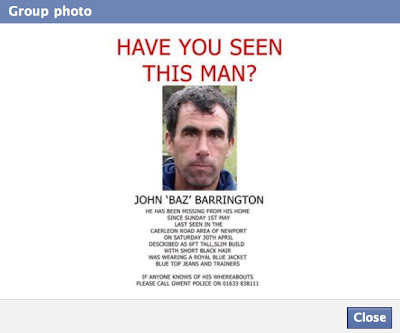 If anyone has any information for the Barrington Family, please contact Gwent Police on 01633 838111.

God bless and good luck. Our thaughts and prayers are with you. American Pro Window Cleaning