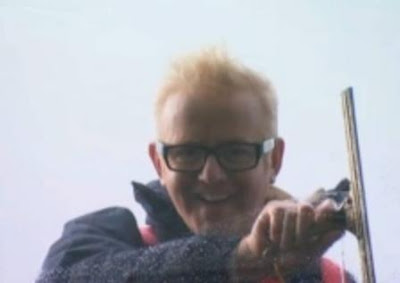 So the producers had to pick a scary job for UK disc jockey & celebrity, Chris Evans (pictured above & left).  The "job from hell" was to become a window cleaner for a day on  London's tallest iconic tower. The One Show host cleaned the windows outside One Canada Square in Canary Wharf as part of a ‘grin and bear it’ stunt for Children in Need. People were asked to vote for one of the presenters - Evans, Jason Manford or Alex Jones - to do a job out of their comfort zone, with the idea raising more than £100,000 for the cause. The film of how the Radio 2 DJ got on as a window cleaner was shown on Children in Need’s live show on BBC One, with Evans admitting he was “petrified”. He tweeted: “Couldn’t tweet while I was up there, no loose objects allowed and no signal! I was properly ******* myself,” adding before the stunt: “All for the kids. That’s what I keep telling myself at least.”

Britain’s scariest job? Meet Canary Wharf’s window cleaner: Paul Wright’s work is cold, painstaking and tough - oh, and it happens to be 235 metres above ground. The 24-year-old is one of four people employed to clean the windows of Britain’s tallest building, One Canada Square. His unusual living came to national fame last week when TV presenter Chris Evans joined him for a morning’s work as part of a stunt for Children in Need. 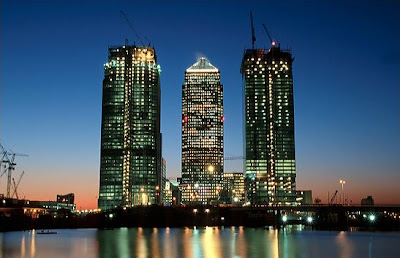 The idea was that One Show host Evans would be subjected to a ‘job from hell’ - but Paul (pictured below) insists there’s nothing to be afraid of. “It probably is one of the scariest jobs in Britain, and the first time you go over it turns your stomach, but I’m used to it now,” he said. “Funnily enough my mum gets more scared - she doesn’t like it. When she saw the clip on Children In Need she had to turn away. “Chris was terrified at first when he stepped away from the roof but he did a decent job once he finally let go of the side!”
Paul and his colleagues from Classic London are lowered down from cradles at the top of the skyscraper, each secured to the building to stop it blowing in the wind. The window cleaners have special training to operate the cradles and are always harnessed and sent down in pairs. The building has 4,000 windows and takes four people a month to clean - after which the job starts all over again. 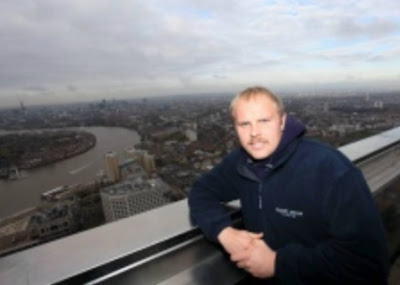 Such extreme work might not be everyone’s cup of tea, but Paul, who lives on the Isle of Dogs, says there are perks to the job. “You’re away from everything and in your own little world. It’s an absolutely amazing view and it’s very peaceful,” said Paul, who has done the job for almost seven years. “The only problem is it does get cold - sometimes we have to use anti-freeze in the water. Oh, and you can’t forget to bring a drink - it’s a long way back once you’re out cleaning! 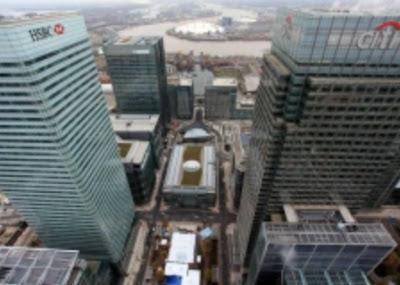 “It’s been a strange week. I was on Radio 2, Children In Need and the Alan Titchmarsh Show. Chris Evans also invited me to the One Show after the shift and we went for a drink once the show was finished. It was fun, but it’s time to get back to work now.”
Canary Wharf window cleaners committed to minimising accident claims: Window cleaners at One Canada Square are backing a national safety campaign to prevent accident claims resulting from falls in the workplace. Peter Kyte Frics, managing director of Canary Wharf Management Limited, explained that safety is always top of the agenda among staff. He added: "We are conscious of the fact that many accidents in the workplace can be directly related to slips, trips and falls. "We do all we can through training to make sure that all workers on the Canary Wharf estate are aware of hazards." The support is being offered to the Health and Safety Executive's Shattered Lives campaign, with the regulator urging employees and employers throughout the UK to take simple steps to reduce injury risks in the workplace. 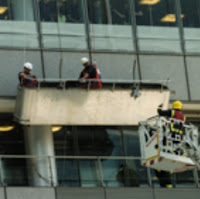 Wharf window cleaners rescued from cradle: Firefighters using ropes and a cherry picker came to the rescue of a pair of Canary Wharf window cleaners stuck on the side of an office building today. The two men were trapped in their cradle, jammed on a ledge at the fifth floor of 25 North Colonnade, which is occupied by the FSA, above the Crossrail site. A call was made around 1pm to the fire brigade and firefighters arrived on the scene a few minutes later. The men were brought down at 2.50pm. After securing the cradle, firefighters lowered them onto a fourth-floor balcony. Crowds of Wharf workers gathered below to watch the pair being lifted to safety.
Posted by Karl Robinson at Wednesday, November 24, 2010