Long in the Tooth? 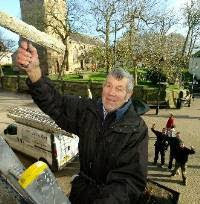 This follows on from a previous "oldie" that made news this year: ALAN Forrest could not be happier ... when he's cleaning windows. And at almost 80 years old, this window cleaner can remember when the famous tune first came out in 1937 – although you won't hear him whistling it even when he's up at the windows of George Formby's former home in Poulton, part of his rounds for the last 40 years. "The lads don't like me singing, they say I sound terrible. "I was in the choir at school and they thought there was something wrong with the organ until they realised it was me singing, " joked the grandfather from Blackpool Road in Carleton. Having started his business 40 years ago, Alan has brought a shine to homes across the Fylde coast and a smile to the faces of his many customers.And even with his 80th birthday approaching in April, he has no plans of quitting yet."I love the job. I get to go out meeting people from all walks of life, you are your own boss and I'm not bothered about going up the ladders. "It's all changed from when I started. It was mop and bucket and a ladder, now it's squeegies and 40 ladderless brushes and health and safety. "But I still do full time. I've no plans for retirement while I can still get about."I've never been afraid of hard work. The harder you work the more you get. "A former professional boxer, Alan also served as an able seaman in the operations room aboard HMS Implacable in the late 1940s. In all his years up ladders, Alan has seen some sights but says discretion is the key and he remains tightlipped. He said: "I've seen plenty through the windows but I don't think I should disclose any of it. "I've done Keith Harris's home and George Formby's place – well I still do it, but I don't sing the song. "Son Gordon Forrest has taken over the business, moving it on from a domestic round to a growing business, servicing shops, schools and hospitals, but there's no moving the old guard. He said: "Dad's a remarkable man, I can't imagine there are too many 80-year- old's working, never mind going up and down ladders in all kinds of weather.Standards"I'm not worried about him on the ladders, he's done this for years. "And Alan's customers are delighted to see him carrying on. Customer Pauline Nicholls, of Maldern Avenue, Carleton, said: "He must be the oldest window cleaner on the Fylde coast. "His standards are high, he's friendly and everyone knows him."

WELL-KNOWN Grangetown resident and former window cleaner Charles Harlin is finally getting used to the quiet life after turning 90. Charles, of South Clive Street, cleaned windows in the area for 46 years, right up until the age of 84. He said: “My family have been trying to get me to have a party every year since I turned 80, but I don’t like a fuss. “Some days I do feel 90 but other times I still feel a lot younger. “Working so hard for so many years certainly kept me fit. I worked ever since I left school at 14; it gives you something to get up for and keeps you strong.”
Blackpool variety legend dies. The final curtain has fallen on the life of a much-loved figure in Blackpool's entertainment world. Heritage campaigner, magician and former theatre proprietor Cyril Critchlow, 85, died peacefully in Clifton Hospital on Friday May 2 after a lengthy illness. In Blackpool, he perfected his Reval magic act in between working as a window cleaner, photographer, bleach salesman and Winter Gardens spotlight operator.
Posted by Karl Robinson at Saturday, May 24, 2008