Firefighters rescue window washer in Deerfield: A window washer who suffered serious injuries after falling into a deep hole in Deerfield Tuesday was rescued by firefighters who raised him out in a rescue basket, officials said. The 47-year-old man was washing windows at the Arbor Lake Centre office building at 1751 Lake Cook Road when he stepped on a grate that gave way, causing him to fall into a 20-foot-deep ventilation shaft, according to a news release from the Northbrook Fire Department. Although the man was conscious and alert, he suffered multiple injuries.

Rescue workers lowered a ladder down to treat the worker, and removed broken grates blocking the 3-foot-wide shaft. Because the 3-foot-wide shaft was too narrow to carry the worker out, a technical rescue team with members from various fire departments used a special hook, rope and pulley system to lower a rescue basket into the shaft and lift the patient out, the release stated. Paramedics then took the worker to Advocate Lutheran General Hospital in Park Ridge. Deerfield Police are investigating the incident.

Northbrook technical rescue: Northbrook units were called to 1751 W. Lake Cook Road in Deerfield before 11AM today for a worker that had fallen 15 feet into a concrete well alongside a building. Companies arrived to find a window washer that had been working over a steel grate that covered the space. An angle iron which supported one side of the grate gave way sending the worker down into the hole. A TRT response was requested. Firefighters in the hole stabilized the patient and packaged him in a stokes basket while rope techs setup rigging to hoist him to ground level. 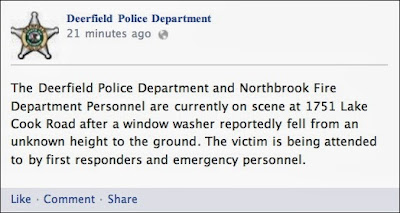