World Trade Center: Terrified Window Cleaners Hanging From New York Skyscraper [FIRST PHOTOS] - Two World Trade Center window cleaners are reportedly clinging on for their lives from a platform after it appeared to experience a technical problem. The platform can be seen jackknifed near the 68th floor, approximately 400m up the 104-floor One World Trade Centre tower.

The incident began at around 12:45 pm on the south side of the building, reported New York CBS. Emergency services have rushed to the scene in an effort to rescue the workers and secure the dangling scaffold platform and are considering removing a window pane to get to the stranded men. 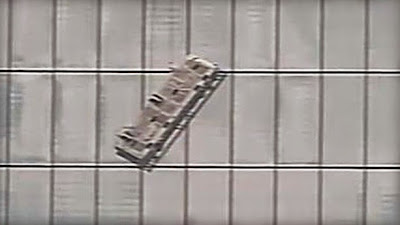 The cleaners had reportedly finished their work on one side of the building's exterior, which was opened just nine days ago on 3 November, and were about to ascend to the top of the tower when one of the motors is said to have failed. Another cleaning crew are believed to be working on the opposite face of the building unaware of the plight of their colleagues. 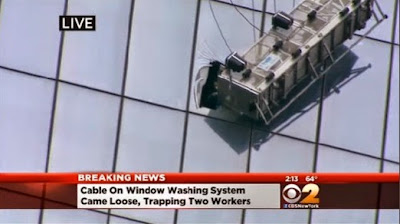 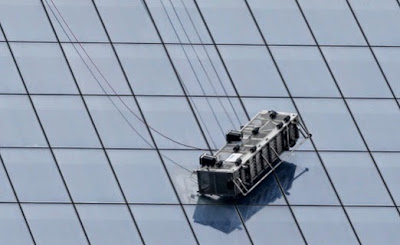 CBS New York reports that at least two window washers are trapped on the scaffolding that hung sideways when one of its motors malfunctioned at 12:45 p.m. CBS News crews caught images on their live stream appearing to show a man on the scaffolding waving his arms. The fire department told CBS that the workers are not injured. The station also reported that the streets below have been blocked off and pedestrians were evacuated for safety.

The Wall Street Journal spoke to a New York Fire Department spokesperson who said, “They are in a difficult spot. They are feeling the effects of hanging in there.” Officials told PIX11 That firefighters are cutting the glass near the scaffolding so they can get the workers out and bring them to safety. PIX11 also notes that winds were blowing at about 6 miles per hour, according to the National Weather Service. One of the windows has apparently been popped. This is a developing story.
Posted by Karl Robinson at Wednesday, November 12, 2014