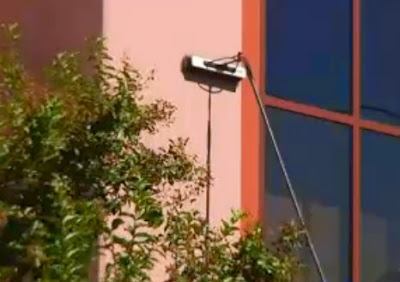 Firefighters responding to a report of a man on fire about 11:40 a.m. at 1365 S. Waterman Ave. found the victim suffering from serious burns, Cooke said. His telescoping pole had touched a line charged with 115,000 volts, Cooke said. The middle-aged man was working with a partner, who was not injured, Cooke said.

The incident happened at the Inland Regional Center, which serves people with developmental disabilities. The victim was believed to work for an independent contractor, Cooke said. The Occupational Health and Safety Administration and arson investigators were looking into the accident. Edison responded to cut off the electricity.

Cooke reminded anyone who sees a downed power line never to touch the line and to stay back and call 911. Electricity can jump 3 feet, Cooke said. Also, a person who touches another who has been shocked could also be injured, Cooke said.

"Yeah it was scary," said witness Jose Cabrales. Cabrales works with the victim for Mr.Window window washing service. He said he was using a 30-foot pole to wash the windows on the third floor of an office building, when he heard an explosion. His co-worker was using a similar washing pole, and accidentally touched the high voltage lines that stretch across the business park.

He said the victim was frozen by electricity and couldn't let go of the fiberglass pole, until it disintegrated in his hands. The victim’s clothing also caught on fire as Cabrales ran to get help.

"When we arrived on scene, we saw numerous bystanders that were rendering aide and trying to keep the individual calm and keep him conscious throughout the ordeal," said Battalion Chief Nathan Cooke of the San Bernardino City Fire Department. Firefighters say its a miracle the victim didn’t die instantly because of the amount of electricity that ran though his body. "An electrical outlet is a 110, and this was 115,000 volts, so put into perspective," Cooke said. "That's a lot of power and electricity he contacted today."

Investigators, including Cal/OSHA, are now looking into the incident to see if any safety regulations were violated. The victim, who has not been identified, was hospitalized in critical condition. Witnesses said they hope the victim makes a full recovery. "My prayers are out to them out to his family and him," said San Bernardino resident Leticia Romero.
Posted by Karl Robinson at Saturday, October 25, 2014