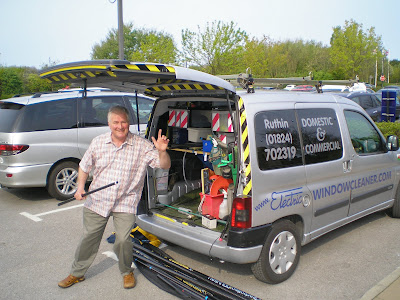 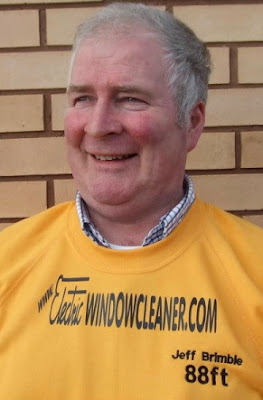 Jeff Brimble (pictured) is often the name people look for on all the window cleaning forums when they need to know about water fed pole (WFP) problems or brush techniques. His moniker,"save your life and go waterfed" usually follows his answers as Jeff dishes out advise, from window cleaning companies to WFP manufacturers. Jeff usually has an answer up his sleeve to almost every problem associated with waterfed pole work. From his nightlight cleaning lamp to the first ever backpack & of course the lightest ever WFP's, window cleaners lives have been changed by Jeffs approach & his inventiveness. I personally, bought my very first DIY modular carbon fiber fishing pole from Jeff (that's it in my profile photo!) & it's still one of the lightest poles on the market, except for the ones Jeff wields on a daily basis. Todays question & answer session will give you more insight into Jeffs world!

You’re known as “Electric” on the forums – how did that name come about?
I have an odd name that's difficult to spell and people can never remember if it's Geoff or Jeff! The electric backpack brought about the name & I wanted a trick that people could remember, hence the "Electric Window Cleaner" web site.

How long have you 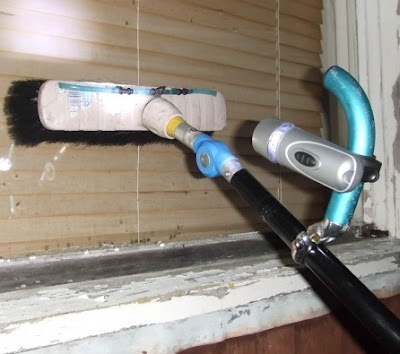 been window cleaning?
I started early - 1967 as have most young men, I think we all try it. I had a partner in Blackpool called Alan Forest - now the oldest window cleaner in the UK. I learn't my trade off him - a real gent', he was the AAA boxing champion of Lancashire so I had to behave !

Based in Ruthin, Wales, how come you don’t have a Welsh accent?
Listen "boyo," it depends who I am talking to. My wife says I am like a sponge with any dialect, so much so, that she find it embarrassing when I turn it on. Maybe its also to do with having "English" lessons when I was younger. Didn't work though!

When did you first pick up a water fed pole? Did you make it, or was it a bought one?
I converted an Unger Aluminum pole after reading about the Tucker USA poles in the AWC mag and joining Gary Mauers email forum many years ago. Twelve years ago - After two years of developing it my wife thought I was mad and that people would never accept it, but they did and she now knows I will come home safe at night. 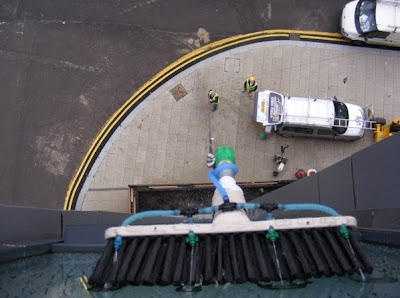 So when anyone wants to know about water fed poles – they come to you Jeff. Are you happy with that?
Yes, I remember going to my first Master Window Cleaners exhibition in Windsor, UK, the same year as OTT started (now Ionics). I had by then my own 12v backpack. The next years were spent encouraging everyone "To save their life and go waterfed." At the Blackpool MWC exhibition I took many laughs and jokes in my stride with the backpack on! Thanks to the space given By Craig Mawlem from Ionics.

You were the first person to

incorporate carbon-fiber poles in to window cleaning, how did the idea come about, explain more?
Hmm, I had a mate that used to go pole fishing, I had never heard of it, but when he let me hold his pole & how light it was - I was sold! I immediately bought an old "Leeda Blue diamond" off him for the staggering price of £200. He taught me a lot & I set about converting it. I was so excited when it was delivered - 8ft sections and really heavy at 60ft! After the fishing pole conversion I managed to sell it for half the price.

Is fishing a hobby for you?
Well I once caught a sea bass off the prom in Blackpool but was hopeless at fly fishing so gave it up.

I remember when the window cleaning forums first laughed about your carbon fiber fishing poles for window cleaning – happy now?
Karl, it was very hard being laughed at, I still have things to achieve, cleaning at 100ft being one of them (which I offered to one of the pole manufacturers just for my costs but was turned down).

When the first carbon fiber commercially made poles entered the market, did it ever occur to you that you started a craze?
Yes I realised a revolution was about to happen. 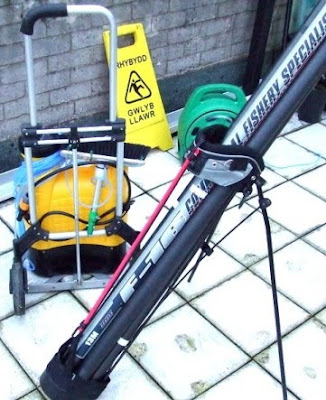 Do you have a favorite fishing pole you have adapted for window cleaning?
5-10 years ago they made the fishing poles out of stronger material but when the fishermen demanded stronger and lighter 16 metre poles they managed to get the wall thickness even thinner, if the window cleaning industry could only persuade the manufacturers to go back in time we could have reasonably priced poles. My favourite, is the legendary "Leeda Blue Diamond" but as I wanted a pole that everyone could use, I picked (after trying many) the "Map F16" as it was the new kid on the block and available indefinitely, it's predecessor was the stronger " M16."

What’s the highest you’ve ever been with a water fed pole?
A contractor from Sheffield asked me for some help cleaning a large building in Sheffield (pictured), he said it was about 78ft which ended up being 88ft 2" when we measured it on the ground. It taught me a lot including how to make high pole work say 100ft safe and possible. My previous height was 80ft, but hey, you Karl have my previous high pole the 80ft "Garbalino" with twisted strand technology.

What techniques do you utilise at that height as opposed to lower WFP work?
Well still air helps, but if there are any safety issues I get my secret "sky hook " bits and pieces out of the van. You have to be a natural plate spinner/balancer and keep your eye on what the brush is doing, as there is a tendency for the pole to curve back on itself & return to earth under gravity.

What height are you most comfortable with?
45ft is where the competition fears to tread on ladders, so that's the market I aim for.

Which is your favorite commercial WFP?
I gave some input to Alan at Emporium with his Ultralight (now ceased supplying the window cleaner market) and he sent sections for the 88ft job, which as far as I know is a world record. 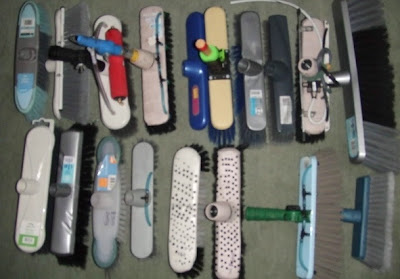 Which is your favorite water fed pole brush?
Well I have had a swivel brush which works similar to the "whirlwind squeegee", I bought a half pallet load to get me to retirement and havent found anything to beat it, but I do like the Tucker range who I reckon have the best and most copied. Their UK distributor "Aquafactors" have their own cladding brush which is very soft and light.

I saw you bought a Nec-protech at one of the cleaning shows - how's that working for you?
I buy anything new to evaluate, sadly the Nec Protech is not for me as its too cumbersome. Fortunately the beginners neck pains have eased after 6 years of muscle building.

What’s the trickiest part of water fed cleaning ?
Without doubt its what I originally termed the "learning curve" and taking the plunge to try water fed pole work. I developed the first backpack after a good friend fell backwards off a 4ft step ladder and died two weeks before his much awaited retirement. 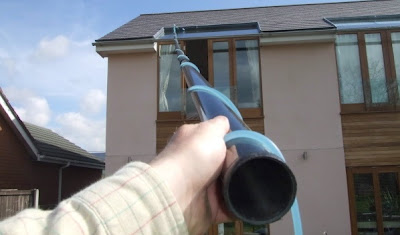 Spotting – can it ever be reduced ?
Its odd that we now have to apply nano-technology to make windows that used to sheet, sheet again, after being through the double glazing process. There are suppliers out there that still install sheeting glass, "Everest" in the UK being one, they also have installers that don't spread silicon and add finger prints all over the glass installation. Once any petroleum/silicon coating has been applied to the surface of the glass then there is nothing in the known universe that can remove the absorbed chemicals.

You collect your own WFP water from the sky by rain water harvesting – do you think this water is better for cleaning?
Yes one day we will understand why, natural rain is "softer" and different to water made from reverse osmosis (RO). Its good for our green footprint and the customers love the idea.

With rain water harvesting in mind - how often do you have to make production water from an R.O?
One IBC (1 tonne, industrial bulk container) full this dry year.

You use the least water of anyone I know to clean windows – what’s your secret ?
I guess its because I started with a back pack and wanted to stretch the water between fills, I still cannot understand why the suppliers encourage you to use gallons of the stuff, hmm or maybe I can, just add some filtered rainwater if you're in a limestone/borehole area. Most people cannot understand it either Karl, but it's an acquired art. I can use 330ml (1/4pint) per minute, but in dirty/dry weather I use up to 440ml (approx 1/2 pint/min). 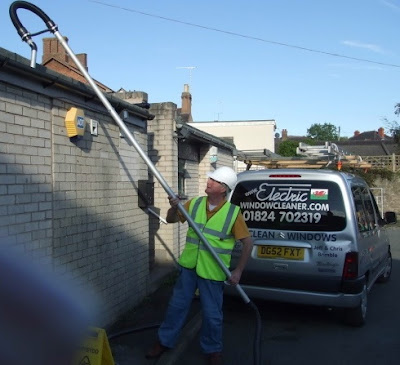 When do you think the USA will catch up with British users in the WFP arena?
They already are buying UK equipment and Phillip Alexander (Simpole) is probably going to catch fast, the nature of window cleaning in the USA is totally different to the regular cleans we do in the UK though.

Where would you most like to live & practice window cleaning?
The big mistake I made was not moving to any large town 10 years ago, but I really do enjoy the rural life.

How many DIY/Inventions do you have on the go at the moment ?
Well there is the new brush you and I have been developing, introducing a cheap telescopic tapered modular with 3ft sections another (video featured). Then there is a wind resistant pole, I used to be a chimney sweep so the ideas for that come from that job, I have had a large variety of jobs.

Where do you see window cleaning in ten years from now ?
Nano technology may be there by then, its not working yet. I like your cleaning by sound ideas Karl -oh and a NASA Powered anti gravity jump pack would be a good Christmas present. Or an anti gravity skate board,self raising pole - I have a spoof picture of a pole with 4 helium ballons tied to it! Seriously though, I would hope that even in the next century there will be a demand for our "shiners" services, we are the problem solvers. Because of that, we probaby are the hardest sell next to ice cream to eskimos, but it's a great job. I already have a passive hot water system and have already made a wind resistant pole.

I drove from Wolverhampton to Ruthin to meet with Jeff in 2007 so i could check out his fishing poles.